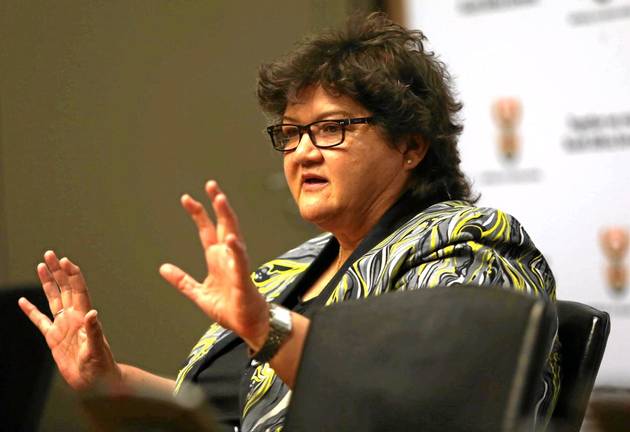 Minister of Public Enterprises Lynne Brown allegedly intervened at the request of the Guptas to prevent the suspension of then-interim CEO Matshela Koko by the Eskom board earlier this year.

The explosive allegations against Brown were made in evidence presented on Tuesday by Eskom reputation manager Khulani Qoma.

Koko has been central to controversial deals with Gupta-owned Tegeta Exploration and Resources‚ and is under suspension for concluding contracts with a company in which his stepdaughter was involved.

Qoma told the inquiry into state capture by Parliament's public enterprises committee that former chairman Ben Ngubane had confirmed to him that the Eskom board was on the verge of suspending Koko earlier this year‚ when Brown had phoned to prevent it.

Ngubane had called a special board meeting to discuss the suspension‚ which had been agreed to by the board.

According to Qoma‚ Eskom acting-chairman Sethembe Khoza had left the special board meeting just before Koko was called in to be given his suspension‚ in order to phone one of the Gupta brothers to inform him of the development.

A short while later‚ Brown phoned to stop the suspension‚ leading to the conclusion that the Gupta brother must have phoned Brown to inform her of the imminent suspension of Koko.

Qoma said Khoza had also told him that Brown was captured and reported to the Guptas.

Qoma wanted to know‚ too‚ why the Eskom board had tried so hard to keep suspended financial director Anoj Singh in his job‚ after he had been suspended.

Brown had not taken action against Singh either‚ even though he had caused her to lie to Parliament‚ by saying that Eskom had not paid Gupta-linked Trillian Capital any money – when it had in fact paid the company hundreds of millions of rand.

Singh did not face any consequences for this.

Eskom is confident that it will survive a looming cash crunch if a new board is appointed and corporate governance issues are resolved.
News
4 years ago

This was just one of the "puzzles" that Qoma revealed in relation to Brown. He said he believed that the minister had appointed Koko‚ when he saw Koko lying on Carte Blanche‚ and when he saw media reports about corruption.

"It was all in her face‚" Qoma testified. Brown had also recently appointed Sean Maritz as interim CEO‚ and brought in former CEO Brian Molefe. She refused to respond to media allegations about the attempt by her lover to get an Eskom contract.

Qoma said Brown's director-general‚ Richard Seleke‚ was captured‚ as well as her former PA. He claimed the current board was lacklustre enough to prompt questions about where Brown had found them.

"This mess would not have happened if there was a capable minister. She is totally incapable‚" Qoma said‚ adding that Brown lied. The minister‚ he concluded‚ could not explain why she was “in the midst of water‚ but was not wet”.