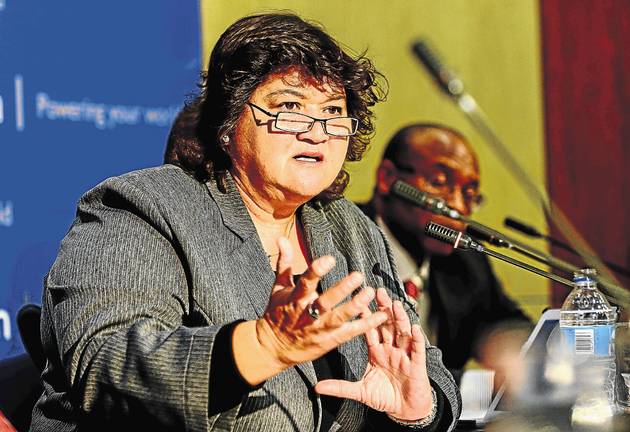 Eskom board spokesman Khulani Qoma has launched a scathing attack on Public Enterprises Minister Lynne Brown‚ calling her a liar who is “totally incapable” of doing her job.

Qoma did not hold back on Tuesday as he testified before parliament's public enterprises committee‚ which is holding an inquiry into state capture.

Qoma testified that Brown was surrounded by captured individuals but tried to convince people that she herself was not.

“Minister Brown has gone to the end of the world telling us she is not wet‚ but she is right in the midst of water. Her DG is captured‚ her PA is captured‚ obviously her lover has interests at Eskom‚” Qoma said.

“Minister Brown lies‚ she lies all the time and she thinks we can't see it.”

He detailed how earlier this year‚ following severe damage to Eskom's corporate image‚ former board chairman Dr Ben Ngubane “came close to suspending acting CEO Matshela Koko” but said he was stopped at the eleventh hour by Brown.

Minister of Public Enterprises Lynne Brown allegedly intervened at the request of the Guptas to prevent the suspension of then-interim CEO Matshela ...
Politics
4 years ago

Qoma alleged that‚ on the day in question‚ Koko had been called back to Eskom and Ngubane had met with the board to discuss his suspension.

However‚ “Mr (Zethemba) Khoza told me that he snuck out and made a call to a G-brother - which I understood to mean a Gupta brother”.

He said the Guptas had then called Brown‚ who shortly thereafter called Ngubane and halted the suspension.

Qoma said Khoza had told him that “Minister Brown is captured” and that four new board members would be appointed by the Guptas.

Qoma was head hunted by members of the Eskom board last year in a bid to deal with “reputational issues” that had mainly stemmed from the Public Protector's State of Capture report.

He said‚ before he had started‚ Koko had appeared on television programme Carte Blanche‚ where he had “totally lied” about a payment made to Tegeta for the purchase of the Optimum coal mine.

He said despite this and the fact that Koko came across in the media as “someone without any ethics”‚ Brown had appointed him as acting CEO.

“The minister appointed Koko after he lied on Carte Blanche. She brought (Brian) Molefe and Anoj (Singh).”

He said Koko‚ together with CFO Anoj Singh “were eating the entire asset of the state faster than you can imagine”.

He said the leaked Gupta emails had detailed misconduct by the two‚ including flights to Dubai for Koko‚ but “they did not explain”.

“It's clear that they knew they weren't innocent. Where does that leave Eskom's image? In the doldrums!” he said.

Qoma later penned a damning report about the reputational damage at Eskom‚ suggesting that Koko needed to be removed.

He said Brown had repeatedly been lied to‚ and had misled Parliament as a result‚ but said she did little to act against those who “caused her to lie”.

“The problem here is the minister - she has not been able to respond to the media. She will say I have been lied to. The minister needs to sit here and account.

“She's totally incapable‚ there's no doubt about it.”