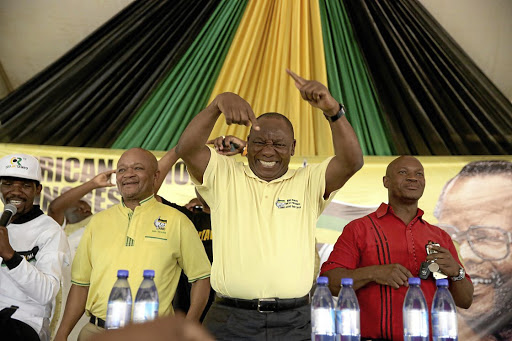 MIXED SIGNALS Cyril Ramaphosa at an ANC rally in Jozini, on the KwaZulu-Natal North Coast, on Sunday.
Image: Thuli Dlamini

ANC deputy president Cyril Ramaphosa has committed himself to stopping theft from state-owned enterprises, economic growth and the "renewal" of the ruling party.

He was making his final push on his election campaign in KwaZulu-Natal on Sunday.

Ramaphosa spoke of a revitalised ANC after the party's December elective conference. He promised to put forward policies that would put the ANC on an upward trajectory for the next decade.

He said he wanted thieving, mismanagement of funds and corruption and collusion to end at state-owned enterprises, saying they were crippling the economy.

Ramaphosa was speaking at a rally in Jozini, on the KwaZulu-Natal North Coast, on Sunday.

ANC branches which have not wrapped up nominating their voting delegates for next month’s National Conference on Sunday will not be allowed to vote ...
Politics
4 years ago

He had earlier spoken in Nongoma after paying homage to Zulu monarch, King Goodwill Zwelithini, and receiving the blessings of the Nazareth Baptist Church, also known as Shembe Church.

Ramaphosa said the South African economy was performing badly because it was in the hands of a few and was being controlled by whites. He said blacks should also be allowed to participate in the economy.

"However, that money is being mismanaged. There are people who steal money in bags. It's taken in huge quantities and it flies out of the windows, doors and in bags. This thieving will not grow our economy," he said.

The ANC‚ like the National Party‚ could be forgotten‚ warns Ndebele

Respected academic Professor Njabulo Ndebele has questioned whether the ANC possesses the maturity to anticipate and accept the reality of eventually ...
Politics
4 years ago

Ramaphosa said if the thieving were allowed to continue at this rate, the country would teeter on the verge of collapse. The thieving was depriving the masses of work as companies held back on spending.

"We need to stabilise the SOEs and we need the best brains and best managers as we demand an end to corruption.

"SOEs are key drivers and we want the kind of people who will manage this wealth on behalf of the collective," he said.

"Having said that, we also demand that there be growth in transformation in the private sector. We want our people to be
co-owners, managers and controllers of this economy. This will happen whether they like it or not because we want an economy that creates jobs," he said.

"Let's go and revive the ANC and make it more powerful. Let's build an organisation that will serve our people," Ramaphosa said.

Mashatile: CR17 leads but branches may sing a different tune

ANC deputy president Cyril Ramaphosa might be the frontrunner in the presidential race‚ but‚ warned Gauteng ANC chairperson Paul Mashatile‚ the ...
Politics
4 years ago

The ANC's ability to overcome economic challenges has been "undermined over the last decade by a failure of leadership and misguided priorities", ...
Politics
4 years ago

The choice of who will be in charge of the ANC has been left in the hands of 5,240 people‚ the governing party has confirmed.
Politics
4 years ago