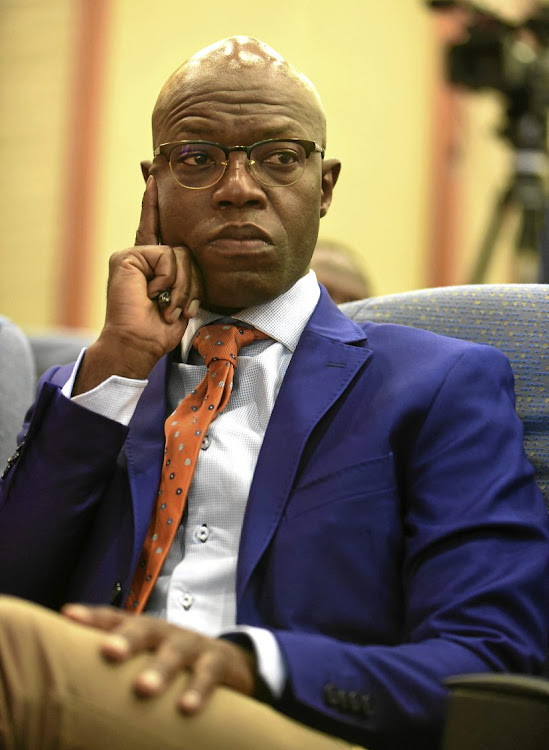 Key witnesses in the disciplinary hearing of suspended Eskom executive Matshela Koko are crying foul over what appears to be a campaign of intimidation designed to silence them.

Koko’s hearing is due to resume on Thursday‚ after a lengthy postponement.

In the past two weeks‚ both France Hlakudi‚ who was a contracts manager at Kusile‚ and his boss Abram Masango were issued with letters of suspension for various allegations of misconduct‚ action seemingly aimed at excluding them as witnesses in the Koko disciplinary hearing.

Masango‚ the executive responsible for group capital infrastructure which built new power stations‚ was suspended last week‚ on allegations "of generally corrupt conduct". It is not clear if he will still be called to testify against Koko.

The relationship between the two men deteriorated soon after Koko was appointed acting chief executive in January‚ after the controversial departure of Brian Molefe. At the same time Eskom advertised the vacant post of CEO‚ and both men — who were members of the utility’s executive committee — applied.

Koko is alleged to have waged a campaign to eliminate potential competition for the top post. Masango was soon removed from his position as head of the group’s capital division responsible for infrastructure investments and placed as an assistant in the office of the CEO.

The Eskom board was forced to intervene in the feud‚ with then chairman Ben Ngubane‚ directors Venette Klein and Zethembe Khoza meeting Koko to coach him on better relations with his colleagues.

It’s a kangaroo court! This was how Public Enterprises Minister Lynne Brown reacted to humiliating criticism of her ethics and ability voiced during ...
Politics
4 years ago

Hlakudi resigned on receipt of the letter.

Koko is facing six charges‚ including irregularly awarding more than R1bn of tenders to a company in which his step daughter held shares‚ as well as irregularly removing some of his colleagues from their positions when he became the utility’s acting chief executive in January.

It is understood Masango and Hlakudi were some of the victims.

Business Day can report that Hlakudi will not be giving evidence before the hearing on allegations that Koko usurped Masango’s powers in axing Hlakudi from the Kusile project.

Senior Eskom sources with intimate knowledge of the matter said the suspensions of both Hlakudi and Masango‚ while based on legitimate concerns over possible wrongdoing‚ were fast-tracked to stop them from being called before the hearing.

The same source agreed both men and others were being targeted to protect Koko. Eskom denied that there was any victimisation at the utility.

Hlakudi would not comment when contacted on Sunday saying his relationship with Eskom was now over‚ and that he could not speak for the power utility.

In his resignation letter‚ dated November 13‚ in which he disputes the grounds for his suspension‚ Hlakudi again denies the allegations against him‚ that he accepted a R20m bribe to divert tenders at Kusile.

"I persist in my view that the allegations against me are unfounded and that this would be borne out in any investigation or disciplinary hearing‚" Hlakudi writes.

"However‚ having said that‚ and judging by current events‚ any such disciplinary hearing is likely to be a protracted‚ costly and hostile exercise. More importantly‚ I feel that the current environment at Eskom is toxic and not conducive to a healthy employer/employee relationship. The clear message I get is that I am no longer trusted by Eskom and that any attempt by me to salvage the relationship would be futile."

Hlakudi’s lawyers also wrote to Koko’s legal representatives last week to complain that he was being intimidated and defamed by Koko‚ City Press reported.

A letter addressed to Masango on November 3 by acting group chief executive Sean Maritz meanwhile states that the utility has commissioned an investigation into allegations that he "committed serious misconduct relating to an undeclared conflict of interest and generally corrupt conduct".

According to Eskom‚ an external company that had been hired had not yet completed investigations into allegations against Masango but that Maritz was "guided by the investigators’ report".

"Mr Masango is still a witness and has not been excluded. Mr Hlakudi has declined to give evidence as he is no longer an Eskom employee‚" Eskom said in a written response to questions on Sunday.

Masango is believed to have blown the whistle on Koko to the Eskom board‚ which eventually led to his suspension.

According to internal Eskom documents‚ Koko had tried to force Masango to take up study leave to attend Harvard University in the US allegedly to "ease political tension" at the head office. Masango refused.

He was soon demoted to the post of assistant in the office of the chief executive officer.