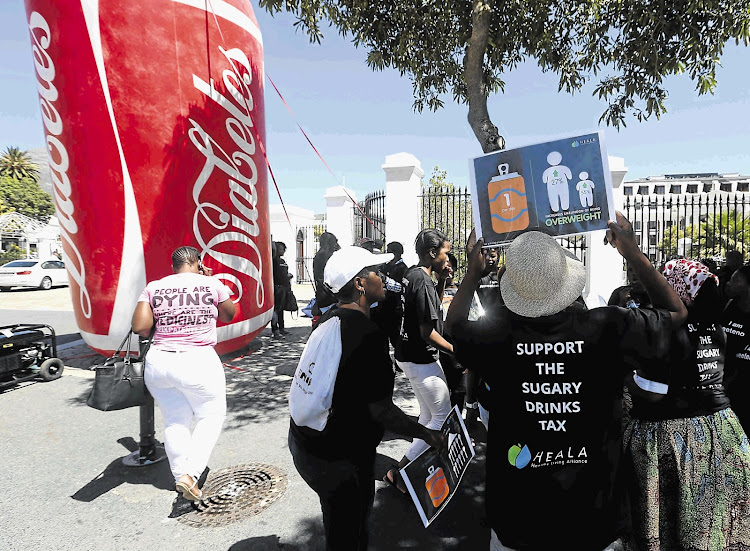 Protesters gather outside parliament in Cape Town where the first round of oral submissions was held yesterday as part of the hearings into a proposed 'sugar' tax on soft drinks, energy drinks and sweetened milk.
Image: ESA ALEXANDER

An extraordinary move by the National Council of Provinces Select Committee on Finance could sabotage the chances of the tax on sugary beverages being included in the Minister of Finance’s 2018/19 budget‚ claims the Healthy Living Alliance (Heala).

The organisation states that parliament should not have held hearings on the sugar tax and is stalling the introduction of the Bill. The Rates and Monetary Amounts and Amendment of Revenue Laws Amendment Bill‚ which provides the statutory foundation for the tax‚ was passed in the National Assembly last week. Since this is a money bill‚ it is processed by parliament in the same way as a bill that does not affect provinces.

This means that‚ although the bill is referred to the NCOP‚ members of this chamber cannot prevent the National Assembly from adopting the legislation. Therefore‚ the decision by the NCOP Select Committee on Finance to hold three days of hearings on the bill – from Tuesday to Thursday this week – is extremely unusual‚ said Heala in a statement‚ especially since parliament goes into recess on 6 December.

Coca-Cola has reduced its fizzy drinks can and bottle sizes‚ saying it is about helping consumers reduce sugar‚ but it has also reduced the size of ...
Business Times
4 years ago

In addition‚ the Select Committee failed to issue any public call for submissions and only had two parties that are opposed to the tax set down on the Order Paper to make submissions‚ claims Heala.

“We can’t help suspecting that the committee has an agenda to stall the bill and prevent Treasury from introducing the sugary drinks tax in April‚” said Heala coordinator Tracey Marawana.

“Our suspicions are reinforced by the fact that the only two non-government stakeholders scheduled to address the NCOP committee were BevSA and Tiger Brands‚ both of which have a vested interest in delaying the tax.

“Heala virtually had to force its way onto the committee’s agenda in order to argue the case [in favour of] the tax‚ which is South Africa’s first national policy measure to tackle the obesity epidemic that is costing this country dearly in lives lost‚ massive healthcare costs and lost productivity.”

Coca-Cola has apologised for not explaining that the reduction in can size from 330ml to 300ml and the bottle from half a litre to 440ml would not ...
News
4 years ago

Once the NCOP has dealt with the Bill‚ it will be referred back to the National Assembly for a final decision and‚ assuming the Assembly assents‚ it then goes to the President for signing. With the Budget speech due to take place on 21 February‚ a delay at any stage could force Treasury to drop the tax from its revenue estimates for the coming year‚ said Heala.