Who's really in charge at the NFP? 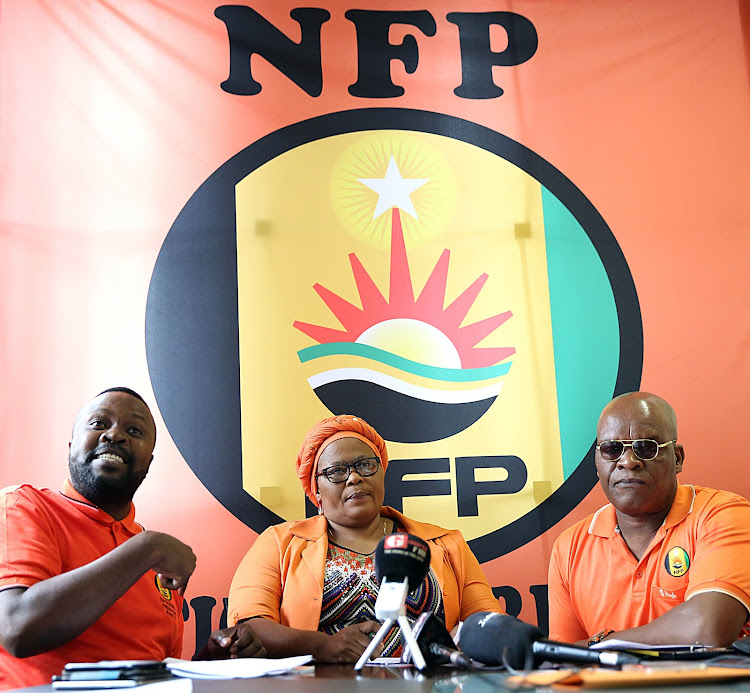 Who exactly is running the National Freedom Party?

While the two factions agree that their president is the infirm Zanele kaMagwaza-Msibi‚ she has denounced a newly-elected structure that elected her as leader just a few days ago.

On Wednesday‚ these newly elected officials held a media briefing at the party offices in Durban.

However‚ the deputy minister of science and technology‚ who has struggled with her health since suffering a stroke in November 2014‚ never attended the elective conference - nor did current party deputy president Alex Kekana.

A frail-looking National Freedom Party president Zanele KaMagwaza-Msibi made a rare public appearance during her party’s media briefing in Durban on ...
Politics
3 years ago

KaMagwaza-Msibi has since denounced the conference and distanced herself from it.

But Mashinini-Maphumulo said the conference had been held following the holding of the KwaZulu-Natal and Gauteng provincial general conferences‚ both held in a space of two weeks - something she said was “history in the making” as no other party had achieved that feat before.

Asked if kaMagwaza-Msibi had sanctioned and endorsed the conference‚ Mashinini-Maphumulo said‚ according to the party constitution‚ she did not have to but that it was a party national executive committee prerogative.

“However‚ the deputy president Mr Alex Kekana was aware of the conference and he signed on the dates of the first and second of December. He did not attend due to death in the family‚” she said.

Attempts to reach Kekana were unsuccessful.

Denouncing the elective conference on Monday‚ kaMagwaza-Msibi said it was imperative for the public to note that no conference of the NFP took place.

Outspoken former ANC MP Makhosi Khoza believes that the country’s president and deputy president should be elected directly and not through their ...
Politics
3 years ago

“Just to take you all a step back‚ on the 4th of October this year‚ I together with the deputy President of the party comrade Kekana pronounced on this issue and I am reiterating it once more. We made it clear then‚ and I am repeating it today that the NFP is in no stage to hold any conference‚ whether it’s a branch or national‚” she wrote in a statement issued by her spokesman Canaan Mdletshe.

kaMagwaza-Msibi said they were currently busy with the processes of inaugurating and auditing branches with the aim of legitimising them.

“For the sake of members of the media and public who have been left confused by a factional cabal claiming to have held elective conference this weekend‚ I want to put you at ease and assure you that there’s nothing of that sort sanctioned by myself and the deputy president or the national organiser as well as the national treasury‚” read her statement.

However‚ Mashinini-Maphumulo slammed Mdletshe saying he was running his own show‚ interfering with party business and his actions had not been sanctioned by kaMagwaza-Msibi.

Former ANC MP Makhosi Khoza is back in politics - in a new political party to be unveiled later this week.
Politics
3 years ago

Contacted for comment‚ Mdletshe said he will not engage Mashinini-Maphumulo “who must carry on running her tavern and leave the NFP.

“Haven’t I been to this road before? Before I issue any statement‚ I consult with the president. What they are did and are doing is undermine her intelligence. I speak for kaMagwaza-Msibi on a personal capacity‚ governmental and party level‚” said Mdletshe.

Imam Sheik Mansour‚ a member of the party’s national working committee also distanced himself from the conference saying it could not sit legally without the presence of kaMagwaza-Msibi‚ Kekana and the PWC.

“Also there is a court case pending which will determine if the president has‚ the right to suspend the NEC‚” he said.