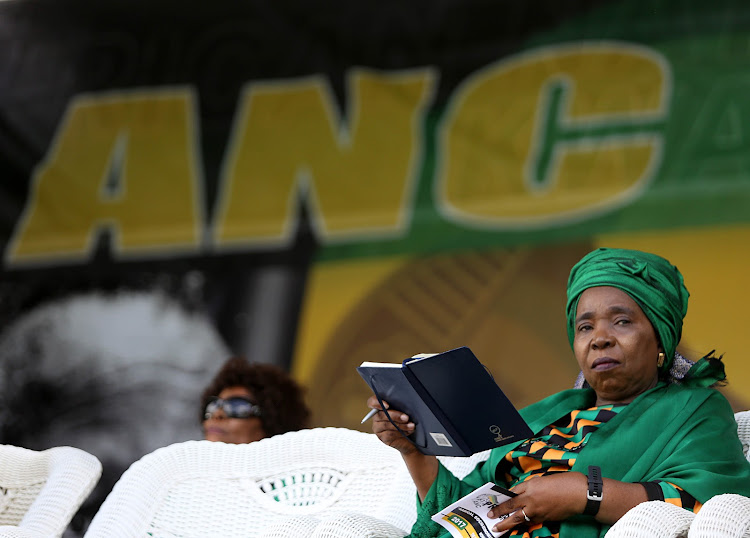 Nkosazana Dlamini-Zuma on stage ahead of a her address at a send-off rally in Durban on Saturday.
Image: THULI DLAMINI

ANC presidential hopeful Nkosazana Dlamini-Zuma told supporters at a party rally in Durban on Saturday that‚ win or lose‚ she's already a history-maker.

At the send-off event ahead of the party's national conference next weekend‚ Dlamini-Zuma said that her nomination for the top ANC post was huge.

"The branches of the ANC and the ANC have made history…because‚ for the first time in the life of our organisation‚ we're going to have a cadre on the ballot paper for the position of president who‚ amongst other things‚ is a woman. That is already history. Whatever happens at Nasrec‚ history is already made‚" she said to applause.

But‚ she said‚ for the branches and members who stood by her‚ she didn't want the story to end.

"At Nasrec‚ you must continue to make history‚" she said.

The ANC leadership race will go down to the wire: here’s why

The race for the presidency of South Africa's governing ANC will go down to the wire. Exact calculations for the frontrunners are impossible and the ...
Opinion & Analysis
4 years ago

Before taking to the podium in Clermont‚ Dlamini-Zuma was greeted by singing of "we are ready for Nkosazana".

During her address‚ she again took aim at the wealth gap between rich and poor South Africans - particularly along racial lines. This‚ she said‚ is what made her now-familiar refrain of ‘radical economic transformation’‚ so important. Without it‚ she said‚ the playing fields could never be levelled.

But she was adamant that education would be one of the key elements of any such transformation.

"Our education system must not only produce job-seekers‚ but also produce job-creators‚" she said.

Dlamini-Zuma's address was expected to end at about 4pm on Saturday.

NDZ addresses a PGC that nominated her

In an unprecedented move‚ ANC presidential hopeful Nkosazana Dlamini-Zuma made an appearance at a party provincial general council that nominated her ...
Politics
4 years ago

KZN ANC forced to recount its votes – and NDZ scores

The ANC's internal election agency was on Tuesday forced to conduct a recount of votes‚ after numbers did not add up in the KwaZulu-Natal structures’ ...
Politics
4 years ago