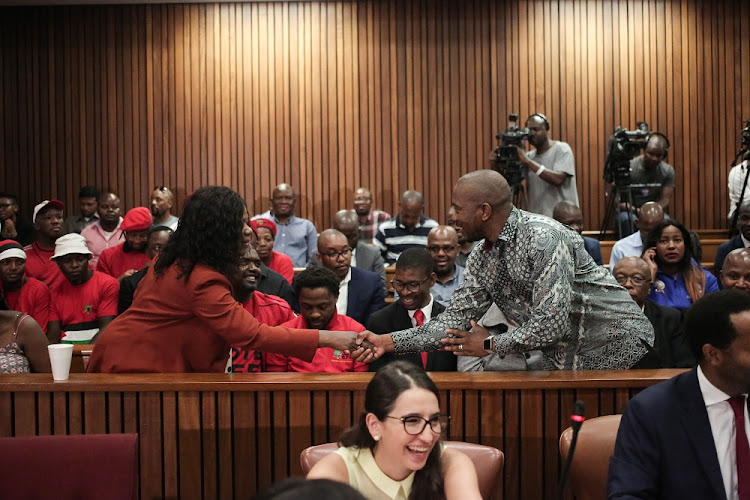 Leader of the DA Mmusi Maimane (Left) greets the former Public Protector Adv Thuli Madonsela at the North Gautneg High Court in Pretoria after the court found that President Jacob Zuma be personally liable for the costs into an bid to halt the state capture report.
Image: Alaister Russell

The DA is thrilled by the Pretoria High Court order that President Jacob Zuma should personally pay the costs of his futile effort to stop the release of the public protector’s state capture report.

"The courts today‚ they are putting their foot down‚ saying Jacob Zuma must be personally liable and not the taxpayer. It is the right judgment. We welcome it and ultimately (Zuma) must stop delaying South Africans‚" DA leader Mmusi Maimane said in court after the scathing judgment on Wednesday.

Judge Dunstan Mlambo said Zuma "clearly acted in flagrant disregard of the duties of the public protector" and described his actions as "completely unreasonable" and "grossly remiss".

The application was brought last year in an attempt to halt former public protector Thuli Madonsela from releasing the report. The landmark judgment could see Zuma having to fork out substantial amounts for legal fees.

Mlambo was also critical of Zuma’s persistence in forging ahead with the legal action‚ even after a statement he made in his own answering affidavit that if Madonsela’s report was finalised‚ it should be released‚ rendering the entire application baseless.

"In my view a simple punitive costs order is not sufficient ... as the taxpayer will carry that burden. The conduct of the president requires a much sterner rebuke‚" Mlambo said‚ adding that Zuma’s actions amounted to an attempt to stymie the constitutional obligation of the public protector’s office.

Maimane said this was only the beginning and the first half of what is to come for Zuma‚ saying his home was prison.

He said the DA now anticipates that the court will ensure that a judicial commission of inquiry is instituted with immediate effect‚ as ordered by Madonsela.

President Jacob Zuma has been ordered to personally pay the costs of his failed attempt to stop the release of the State of Capture report by former ...
Politics
3 years ago

Senior ANC member Jackson Mthembu has made damning allegations of there being desperate attempts to buy votes and rig the party's national election ...
Politics
3 years ago

The Black Lawyers Association (BLA) has refuted claims that a high court ruling setting aside the appointment of National Director of Public ...
News
3 years ago