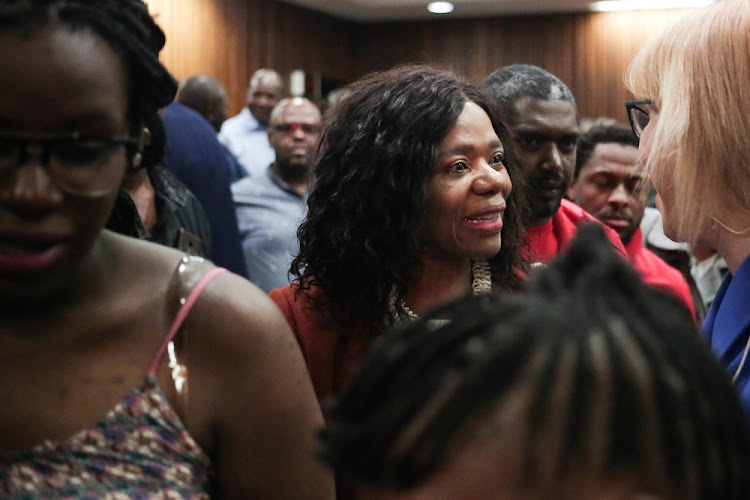 Former public protector Thuli Madonsela burst into tears of joy as the High court in Pretoria trashed President Jacob Zuma’s bid to set aside her damning State of Capture report‚ with the court ordering the president to personally pay the costs for his “reckless” move.

She sat in the front row in the public gallery‚ occasionally nodding and smiling contentedly as Judge Dunstan Mlambo demolished Zuma’s every ground for the “ill-advised” review.

Madonsela said she was happy that the judiciary dismissed the review application‚ saying she and her team did their best.

“…but we knew that judges are the ultimate guardians of the Constitution and could reach a different decision and I am quite happy that they saw the matter the way we did‚” she said.

Madonsela said the cost order against Zuma‚ which could easily run into millions‚ would make government officials reflect and pause after a decision had been made by the Public Protector or the courts.

She said increasingly people just took a matter on review within minutes of the decision being made‚ saying this gave her a sense that people do not apply their minds. “I would think that this kind of decision by the court is trying to say to people ‘please pause‚ please think about the implications for good governance and implications for the use of taxpayers’ monies’‚” she said.

Madonsela released the report‚ titled State of Capture‚ in November last year‚ detailing allegations of an improper relationship between Zuma‚ some state officials and the controversial Gupta family who are in business with his son Duduzane.

In the scathing judgment by a full bench‚ Judge Mlambo said the review application was a clear non-starter and Zuma was reckless in pursuing it. He said his conduct fell short of the high standard expressed in the Constitution.

“…we are of the view that (Zuma) was ill-advised and reckless in launching the challenge against the remedial actions of the Public Protector. His court challenge further delayed the resolution of the state capture challenge allegations. The Public Protector has uncovered worrying levels of malfeasance and corruption in the form of utter disregard of good corporate governance principles‚ some bordering on fraud in government departments and SOEs. His conduct also falls far short of the expectation of him as head of state to support institutions of democracy such as the public protector‚” Mlambo said.

He said the remedial actions presented Zuma with an opportunity to confront and address the problem of state capture.

“…our view is that the President had no justifiable basis to launch the review application in the circumstances. In doing so he was reckless and acted unreasonably. In our view this is a case where a personal order of cost is justified and should be granted‚” he said.

Mlambo said the taxpayer should not be made to carry the cost of the case.

“In my view a simple punitive costs order is not sufficient . . . as the taxpayer will carry that burden. The conduct of the President requires a much sterner rebuke‚” he said.

The court ruled that Madonsela’s remedial actions were binding and ordered Zuma to appoint a commission of inquiry into allegations of state capture‚ headed by a judge solely appointed by Chief Justice Mogoeng Mogoeng‚ within 30 days of the order.

The commission is to complete its task and present its report within 180 days and Zuma shall submit a copy‚ with an indication of his intentions regarding the implementation‚ to parliament within 14 days of its release.

DA leader Mmusi Maimane said Zuma had used every trick to obfuscate the state capture matter and that his party would oppose any bid to appeal the judgment.

He said it was clear that Zuma had no intention of investigating state capture allegations‚ saying as a leader he was the first person expected to take action.

“It would be important for the people of South Africa and the resources of this country that we get to the bottom of this issue…if he does appeal‚ I doubt that another court will not be consistent in keeping with the cost order‚” he said.

COPE leader Mosioua Lekota said Zuma has been acting as the law unto himself and said the blame should be squarely placed before the entire leadership of the ANC.

“They have protected him; they themselves have failed to uphold the constitution. That was confirmed by the Constitutional Court in the Nkandla matter‚” he charged.

Judge Dunstan Mlambo says President Jacob Zuma’s argument - that then Public Protector Thuli Madonsela could not recommend an inquiry be set up into ...
Politics
4 years ago