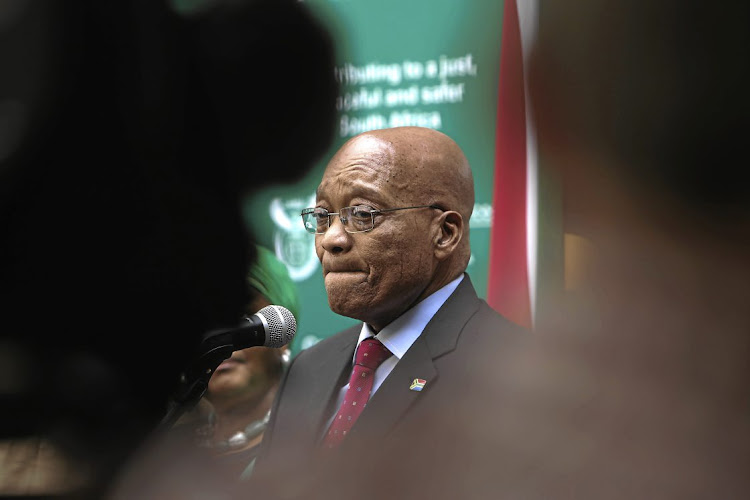 The judgment found that Zuma had been reckless in challenging findings by former public protector Thuli Madonsela.
Image: Alaister Russell

A parliamentary committee has welcomed a Pretoria High Court ruling that dismissed President Jacob Zuma’s opposition to a report on state capture.

“The Portfolio Committee on Justice and Correctional Services welcomes the North (Gauteng) High Court judgment on the former public protector’s recommended remedial actions after an investigation into state capture‚” the committee said in a statement.

The judgment found that Zuma had been reckless in challenging findings by former public protector Thuli Madonsela‚ who had ordered the president to appoint a judicial commission of inquiry into allegations of state capture.

Zuma had argued that the public protector had overstepped the mark in terms of the constitution‚ which gives the president sole authority over composing a judicial commission of inquiry. But the North Gauteng High Court in Pretoria disagreed‚ pointing out that the president’s constitutional powers were finite.

The court directed Zuma to institute a commission within 30 days. Judge Dunstan Mlambo also instructed that Chief Justice Mogoeng Mogoeng select the judge to head the inquiry‚ in line with Madonsela’s report.

Zuma was also personally slapped with the legal bill for his court action‚ which could run into millions. Committee chairman Dr Mathole Motshekga said: “The nation will be assured that we have an independent judiciary that continues to uphold the constitution and the rule of law in the country and that all citizens‚ regardless of their public or private standing‚ are subject to the constitution and the rule of law.”

Madonsela released the report‚ titled State of Capture‚ in November last year‚ detailing allegations of an improper relationship between Zuma‚ some state officials and the controversial Gupta family‚ who are in business with his son Duduzane.

Former public protector Thuli Madonsela burst into tears of joy as the High court in Pretoria trashed President Jacob Zuma’s bid to set aside her ...
Politics
4 years ago

Zuma judgments prove even the president is equal before the law: Outa

The Organisation Undoing Tax Abuse (OUTA) is relieved that taxpayers do not have to pay for President Jacob Zuma's failed attempts to stop the Public ...
Politics
4 years ago