I do not have to buy votes, says Dlamini-Zuma campaign speech 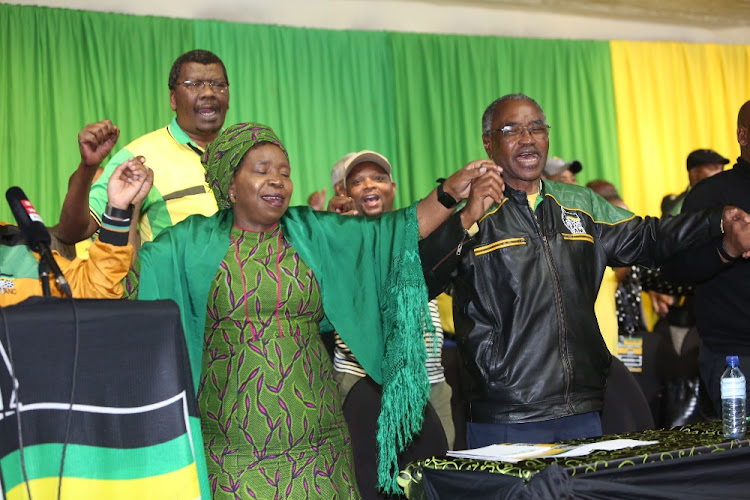 Nkosazana Dlamini Zuma singing with Premier Willies Mchunu at the closing of the ANC PGC in Durban.
Image: Jackie Clausen

ANC presidential candidate Nkosazana Dlamini-Zuma has hit back at claims that her campaign may be "buying votes" and using money to influence delegates at the national conference.

In her last campaign speech before this weekend's conference, Dlamini-Zuma said she did not have to buy delegates. "We have worked. We have been to every corner of this country, addressing cadres' forums. When they elect us, they will elect us out of conviction."

Dlamini-Zuma was speaking at a gala dinner hosted by the ANC Women's League in her honour in Kempton Park on Wednesday.

"No leader will be proud of being elected out of money," she said, later adding that ANC delegates could not be bought.

Dlamini-Zuma said "history has already been made" as she will be the first woman to be on the ballot paper for ANC president.

"As we close this campaign now, it's in the hands of delegates and God," she said.

Dlamini-Zuma said she was willing to accept any outcome, adding: "Whatever happens, the ANC must emerge the winner."

A number of songs and dances were dedicated to Dlamini-Zuma. The former African Union Commission chairman said ANC delegates must reflect the aspirations of South Africans.

She is up against Deputy President Cyril Ramaphosa.

TimesLIVE looks back at Nkosazana Dlamini-Zuma’s political career as the ANC gathers in Gauteng to elect its new leader. Credit: SABC News

Winning ANC candidate must not be linked to policy shift: Godongwana

The candidate elected at the ANC's national conference should not be linked to a shift in policy‚ the party's economic transformation subcommittee ...
Politics
4 years ago

An urgent application to have the Western Cape ANC Youth League leadership declared illegitimate has failed in the high court in Cape Town.
Politics
4 years ago

Unresolved leadership battle would be worst scenario for ANC conference

The worst possible scenario for the ANC’s 54th national conference is an unresolved leadership battle.
Opinion & Analysis
4 years ago