ANC delegates look to the heavens for divine guidance 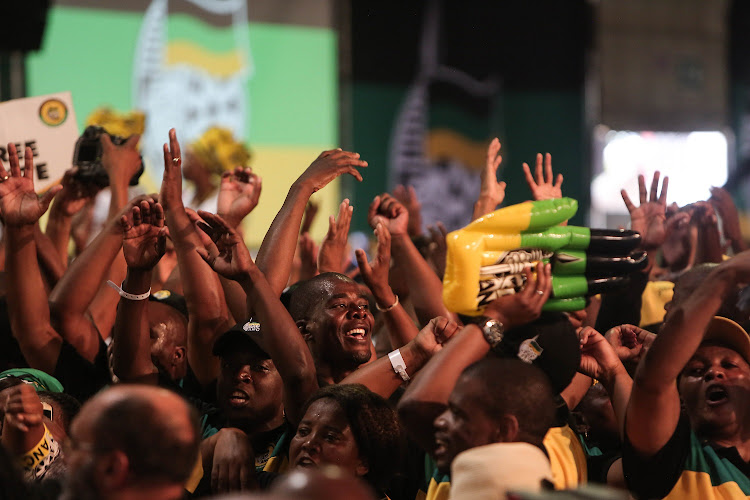 People in the crowd at the ANC's 2017 National Conference,
Image: Alaister Russell

The ANC has looked to the heavens for divine intervention as its 54th conference gets underway‚ with religious leaders blessing the gathering.

The highly divided delegates attending the conference sang hymns with one voice‚ putting aside the differences expressed just minutes before they joined together in prayer.

“Wangithatha la – wangibeka le…‚” they chanted‚ praising the heavens for moving them from one dimension to the next.

They answered an emotional plea from one of the religious leaders to rise and seek God’s assistance‚ to pray that they do not destroy but build.

She broke down in tears as she asked the delegates to hold hands and sing and pray together‚ even if they did not love one another‚ and pray for peace.

This prayer session has been quite dramatic. (That’s a light at the back, not the Holy Spirit) #ANC54 pic.twitter.com/1V52OkFahF

The tensions felt in the hall as different factions sang against each other’s candidates dissipated‚ the silence almost eerie as they took in the moment and its implications for the gathering.

“Because without God and without humbling ourselves to God – we are nothing‚” said the pastor as she explained why it was important for the conference to look to God.

The plenary also broke into a chorus of “yes” and “yebo” when another of the pastors leading the interfaith prayers proclaimed that “the devil is a liar” – remarking how the ANC had defied expectations that the conference would not take place.

They seemed to be in a spiritual trance as the spirits were summoned.

Pastor Joe Maphatsoe called for unity‚ proclaiming proceedings would continue without a hitch.

Seemingly overcome by the moment‚ delegates lifted their hands in prayer and clapped in agreement.

With the stakes high for all delegates in attendance‚ whether the Holy Spirit or other gods called upon could help them overcome the disputes in their branches and provinces is anyone’s guess.

The intercessors read from scriptures‚ explaining how peace‚ integrity and unity were possible if love and selflessness were promoted.

ANC veterans have warned that the party should re-evaluate its internal democracy‚ following a series of court cases in which ANC members from across ...
Politics
4 years ago

President Jacob Zuma’s announcement on free higher education was not made to sway votes at the ANC’s national elective conference‚ Youth League ...
Politics
4 years ago

We are still confident of Dlamini-Zuma victory‚ says Zikalala

KwaZulu-Natal ANC leader Sihle Zikalala says the province is still confident that its candidate‚ Nkosazana Dlamini-Zuma‚ will win the party’s ...
Politics
4 years ago