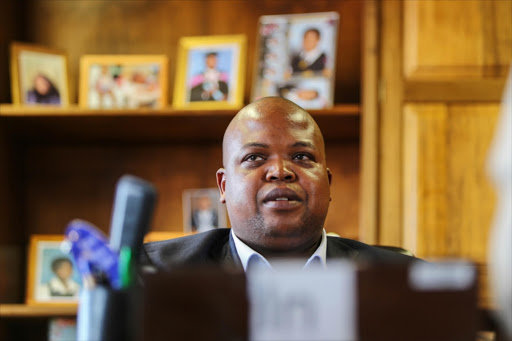 ANCYL leader Collen Maine claimed that the judiciary appeared to be selective when dealing with cases on leadership disputes in the ANC.
Image: Gallo Images / The Times / Moeletsi Mabe

ANC Youth League president Collen Maine has become the latest politician to accuse judges of seeking to influence the outcome of this weekend's ANC elective conference in favour of Deputy President Cyril Ramaphosa.

Maine was speaking in reaction to court rulings by the high courts of KwaZulu-Natal‚ Free State and the North West on Friday.

The court rulings have effectively barred 106 delegates from those provinces from participating in the crucial elective conference as they have been reduced to mere observers.

This is seen as blow to the ANC lobby group known as the “Premier League”‚ which Maine is part of and which is campaigning for Nkosazana Dlamini-Zuma rather that Ramaphosa to replace President Jacob Zuma.

Maine claimed that the judiciary appeared to be selective when dealing with cases on leadership disputes in the ANC.

He pointed out that a case had been brought against the provincial executive committee of the ANC in the Northern Cape but that there was seemingly no urgency in dealing with that matter.

Disgruntled ANC members in that province approached the court to nullify the May provincial conference.

Asked whether he agreed with the court judgments‚ Maine said: "We want to abide by the rule of law [although] we have issues about it - this thing of judges being part of the politics of the ANC - if you look at the timing [of the judgments] and the targeted provinces because there is a similar case in the Northern Cape and the Northern Cape in the majority is seen as not supporting Comrade Nkosazana‚ they are not affected. We will look into that and attend to it."

Turning to other matters‚ Maine also suggested that only certain leaders in the national executive committee (NEC) may have been aware that Zuma would this morning announce the roll-out of free tertiary education to about 90% of students.

"What we can say is that we are not surprised. We knew that was going to happen and we welcome it. There are those in the ANC who wanted to block it [but] we are happy that the president has stood his ground on this particular decision‚" said Maine.

Outgoing ANC president Jacob Zuma did not eat‚ drink or dance at a glitzy “last supper” that was effectively called to bid him farewell after serving ...
Politics
4 years ago

Delegations express their preference for ANC president in song

The ANC’s plenary hall is filling up as delegations compete in song for or against presidential hopefuls Nkosazana Dlamini-Zuma and Cyril Ramaphosa.
Politics
4 years ago