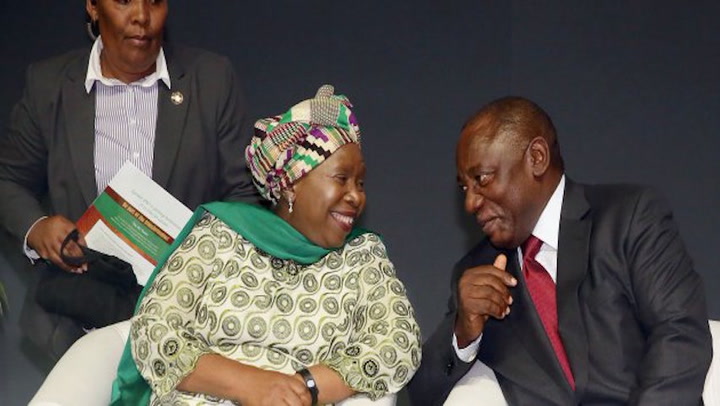 The main candidates of the ANC National Conference 2017 are Cyril Ramaphosa and Nkosazana Dlamini-Zuma.
Image: TimesLIVE

There are two main candidates who are gunning for the top position in the African National Congress.

The two are Cyril Ramaphosa and Nkosazana Dlamini-Zuma. Most of the branch nominations across the country nominated them as the main contenders for the position of party president despite other names being thrown into the hat.

“They know that they don’t stand a chance. But again‚ they know that there are people who have expressed their support for them. I may be Lindiwe Sisulu for example. I may know that my prospects of being president are slim to none. The point is I put my hand up there‚ rather than having myself being allocated to number 93 effectively falling out of the threshold of 80 that the current NEC has.

“You have to push yourself into all these kind of slates that are prominent and also push yourself up in any kind of NEC list that comes up. You will start [to be like] Jeff Radebe. You may not be in the running for president but people will view him as a person who should be number 20 something in the NEC list. The same applies for Zweli Mkhize and all of those people. If they didn’t put their hands up‚ they would effectively be out of the running of many of the positions‚” said Mpolase.

While Mbete‚ Radebe and Phosa did not have big campaigns‚ Mkhize has gone around the country speaking to branches‚ unions‚ youth formations and black business preaching the message of unity in the ANC. Mkhize’s own province‚ KwaZulu-Natal‚ provided little support to boost his campaign for the top position. This is despite him having been the premier of the province and serving in various positions within the structures of the province.

Mpolase said fame and attention is crucial for delegates who will be at the conference.

“The ANC is about spotlights. You have observed what all the PGCs decided. If you look at it‚ it is famous people [who make it onto the list]. There is no one person that emerged from the branches based on work that he has done over the past four years that is being sent to the NEC. No‚ they repeat the same names. These are the people that they know‚” he said.

“It is a bit of a moment of glory [for the candidates]. It could also be very strategic. For example a person like Lindiwe Sisulu‚ I think she always knew that she doesn’t stand a chance. But by doing that [raising her hand] she has positioned herself very well for a deputy president nomination. She is going to be on the ballot. She really propelled herself into the limelight. It is about self glory or strategic positioning for the next round‚” Booysen said.

Outgoing ANC President‚ Jacob Zuma‚ has said that regardless of who succeeds him as ANC president at the party’s national conference this weekend he ...
Politics
4 years ago

ANC leaders have been called to an emergency national executive committee meeting (NEC) early on Saturday morning - two hours before the scheduled ...
Politics
4 years ago

Beyond the elective conference the new leadership of the ruling African National Congress (ANC) must ensure accountability for political killings and ...
Politics
4 years ago