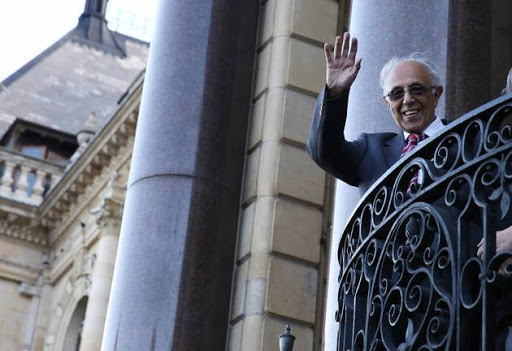 Ahmed Kathrada on the balcony of the City Hall where he received the Freedom of the City from Mayor of Cape Town Patricia de Lille during a ceremony on November 26, 2015.
Image: Esa Alexander

The Ahmed Kathrada Foundation has lashed out at President Jacob Zuma for suggesting that the late anti-apartheid stalwart was persuaded to write a letter calling on him to step down.

The letter caused a stir earlier this year when it was read at Kathrada's funeral‚ which Zuma did not attend.

In an interview broadcast on Friday‚ Zuma said the letter was uncharacteristic of Kathrada.

"Comrade Kathrada‚ in his day‚ would not write such a letter to me. When he's old‚ he now gets into writing letters. Why? I think I know why. Even the language ... Bear in mind‚ I worked as an intelligence (operative). I can read what others can't read in a letter‚ even who possibly influenced this letter. People were very much unfair to influence comrades who are advanced in age."

Ahmed Kathrada’s decision to publicly call on President Jacob Zuma to resign was one of the most difficult and painful decisions the late ANC ...
Politics
4 years ago

The foundation reminded Zuma that Kathrada's views were widely held‚ pointing out that leading figures like Archbishop emeritus Desmond Tutu had also called for his resignation.

"To hint that Kathrada was an old senile man‚ who was prone to being manipulated‚ is nothing short of an insult to the struggle icon's lifelong activism‚" the foundation said in a statement.

"President Zuma's statements are also deeply hurtful to the struggle stalwart's family‚ and the staff‚ the Board and management of the Foundation who worked with Kathrada – activists who have always served and acted with the highest degree of integrity‚ and with great deference to the stalwart. While Kathrada would often seek advice from those around him‚ he ultimately made his own decisions‚ which were respected."