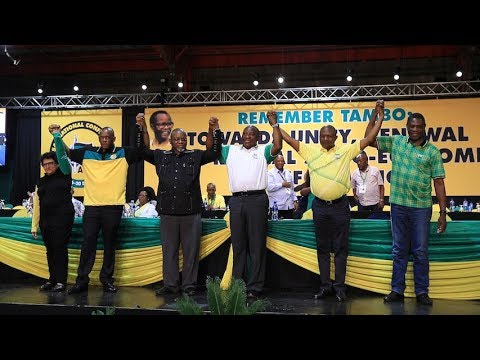 Political analyst Ralph Mathekga on Monday said the newly elected top six of the ANC was trouble waiting to happen.

Speaking to TimesLIVE shortly after the announcement of the top six was made at Nasrec in Gauteng‚ Mathekga said: “This is a very worrying picture. In the last weeks‚ I have said that this was David Mabuza’s conference. If you look at it‚ he had higher votes than Ramaphosa himself.”

Ramaphosa was announced as president of the ANC after beating his rival‚ Nkosazana Dlamini-Zuma, by a slim margin. He got 2‚440 votes and Dlamini-Zuma 2‚261.

“Ramaphosa may be president but the party still lies within the hands of very questionable people‚” said Mathekga‚ questioning whether the ANC was hoping to win the 2019 elections with Ace Magashule as its secretary-general.

“But this is good for the opposition. Tomorrow South Africa will wake up to the reality that the secretary-general of the ANC is a seriously corrupt man. Tomorrow they will realise that the most feared politician of Mpumalanga is now in power.

He added: "South Africa needs to wake up to the reality that the deputy SG‚ Jesse Duarte‚ is implicated in the Gupta scandals.”

Magashule‚ who has spent 20 years serving as the chairman of the ANC in the Free State‚ was recently labelled by the National Education‚ Health and Allied Workers Union (Nehawu) as the “Robert Mugabe of the ANC”. He has been implicated in the Gupta saga along with his son Gift‚ who allegedly also has a long-standing relationship with the controversial family. He has not, however, been charged with anything.

ANC Mpumalanga chairman and Premier David Mabuza has also made headlines in the past few weeks for alleged wrong-doing.

Presidential hopeful Mathews Phosa had accused Mabuza of having a private army that forced ANC members into backing his preferred candidate for the presidential race. The gang allegedly intimidated ANC members who did not favour Mabuza’s unity campaign after he failed to reveal whether his province would back Ramaphosa or Dlamini-Zuma.

University of Cape Town political analyst Zwelethu Jolobe agreed that the outcome of these elections was indeed a big surprise.

“When we analyse the run-up to the politics‚ we always think it will be slates. What we have seen here‚ however‚ is that there are mixed slates. Both camps have people in the top six. That is a departure from previous congresses‚” said Jolobe.

He said he had expected that Lindiwe Sisulu would have been appointed as Ramaphosa’s deputy, but Mabuza beat her to the post.

“Now‚ people will have to rise above the slates they were in, but we will need to watch the NEC to see if there are similar voting parties. If the national executive committee (NEC) combines both groups‚ that will result in interesting times‚” he added.

“This may seem [like a disaster] in the short term but long term‚ everyone will get their voice.”

Asked whether these results could see a repeat of what happened when Thabo Mbeki left his national presidential seat after President Jacob Zuma won the ANC’s presidential seat‚ Jolobe said it was hard to say.

These results, however, gave more power to Ramaphosa.

“There are a few things which are outstanding, such as Ramaphosa choosing the next national director of public prosecutions because Shaun Abrahams’s appointment was problematic‚” said Jolobe. “He cannot be removed as vice-resident. The real power has shifted from Zuma to Ramaphosa. What this means is that in terms of what the court has said‚ he is more empowered but that authority is conditional."

“What I am asking myself is‚ did these results come from the voters or has this come from behind doors?

“I doubt that the results are coming from the branches. I expected the branches to vote along the factional lines but the result overall is good for the ANC and for the country. It has stopped the culture of the ANC of winner takes all‚” Khumalo said.

“It is a ‘three a side’ team and it forces unity. The question is‚ will they manage to work as a team? I am sure they have different aspirations and agendas. Will they be able to work in the interests of the party? All that remains to be seen,” he added.