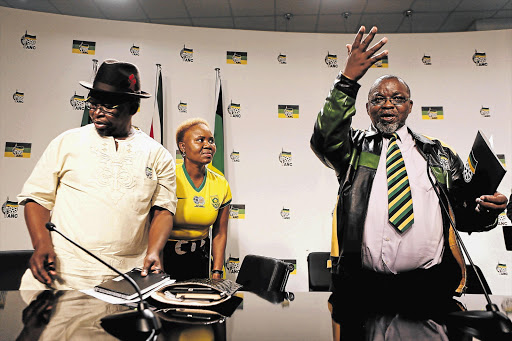 ANC leader Lindiwe Zulu says the lack of gender equality in the newly elected top six shows that the ANC's Women's League still has a long journey ahead of them and that they will have to make up for having only one female representative.

Zulu told reporters that‚ although she was disappointed with the election outcome‚ there would be a concerted effort to get more women in the National Executive Committee‚ which is required to achieve to 50-50 gender parity.

"We are disappointed with the fact that there is only one woman in the top six and we feel that it's a step back for us women. At the end of the day‚ we go back to the trenches as women to see where is it that we didn't do right in ensuring that we've got more women because we had two women in the previous official structure and now we have one‚" said Zulu.

She said although the league's preferred candidate‚ Nkosazana Dlamini-Zuma‚ didn't win the presidential race‚ they will rally behind the newly elected president Cyril Ramaphosa and his top structure.

"It has to be a united top six because the African National Congress has got no chance of succeeding if we don't rally behind the leadership that was elected. The branches have spoken and we need to respect the results as they were and we have said‚ if anyone has any issues‚ they need to take it to the steering committee‚" added Zulu.

Zulu‚ who is currently Minister of Small Business Development‚ said women's struggles in the ANC failed to gain traction in the party because they were reduced merely to issues of representation in party structures.

She called for a broader struggle.

"If we separate the struggles of women and make them an issue for the ANC top six‚ rather than societal issues‚ then we will keep losing‚" she said.

The ANC's steering committee‚ chaired by new ANC chairperson Gwede Mantashe‚ is currently locked behind closed doors after calling an urgent meeting to deliberate on a voting dispute around the secretary general position.

A vote recount has been requested for former ANC KwaZulu-Natal chairman Senzo Mchunu who was on Monday beaten by Free State premier Ace Magashule ...
Politics
4 years ago

ANC delegates party up a storm in Soweto

After a long day waiting to find out who would be the ANC’s top six leaders‚ members of the ruling party took to Soweto to celebrate and some to ...
Politics
4 years ago