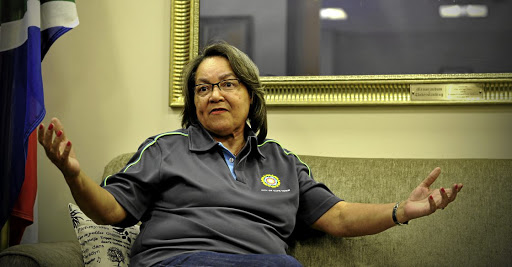 Achmat Ebrahim and Melissa Whitehead have been given seven days to provide reasons why they should not be suspended.

Action against the two top City of Cape Town officials was approved on Friday after the council considered the report of an investigation by law firm Bowman Gilfillan.

The council also accepted a recommendation that a further investigation be carried out into an alleged cover-up of Whitehead’s purported wrongdoing by De Lille.

It all added up to a black Friday for the mayor‚ who was also due to provide the DA with reasons why she should not resign following an investigation by a subcommittee of the party’s federal executive. The subcommittee found management and governance-related problems at the city council.

“Work on the recommendations that are on the system. I cannot converse with you on any of the stuff that [is confidential]‚” said Smit.

Opposition parties applauded the council decision‚ saying it disproved the DA’s claims that it ran a clean government.

The ANC leader in the council‚ Xolani Sotashe‚ said: “The problem for them [DA] is that they have no place to hide now. They want by all means to save their skins.”

De Lille had found a corrupt system in the city and instead of fixing it she joined it‚ he said.

African Christian Democratic Party leader Grant Haskin said his party was happy with the work done by Bowman Gilfillan and wanted the matter to proceed without hindrance.

“Their [DA’s] administration in Cape Town is not corruption free and it’s what we have said for 10 years now. Finally we feel vindicated‚” said Haskin.

Another key figure in the upheaval that erupted late in 2017 at the Cape Town Civic Centre‚ Craig Kesson — executive director in De Lille’s office — is in the clear‚ according to the Bowman Gilfillan report‚ and the council accepted a recommendation that no disciplinary action should be taken against him.

In Ebrahim’s case‚ the council said three allegations against him “are of a serious nature” requiring disciplinary action. Whitehead faces a probe into four allegations.

The council audit and performance committee will appoint the presiding officer and the officer to lead evidence at disciplinary hearings for Ebrahim and Whitehead.

“Council notes that as the executive mayor and city manager are conflicted in this matter‚ it would be impractical and inappropriate for them to be tasked with [those appointments]‚” it said.

The officer leading evidence will have wide-ranging powers‚ according to the council resolution. “He/she will have full unrestricted access to any council document‚ system‚ councillor‚ member of staff or contractor or adviser‚ without the need for any further approval.”

The Bowman Gilfillan investigation came after Kesson made explosive allegations against the mayor in a sworn affidavit. This followed Sunday Times revelations about alleged wrongdoing in the Foreshore Freeway Project.

In one his allegations‚ Kesson alleged that De Lille had asked him to bury a report with damning allegations of corruption involving over R43-million in a MyCiTi bus tender.

The council resolution echoed this: “Council notes the allegations ... that the executive mayor prevented the city manager from reporting the allegations against [Transport for Cape Town commission Melissa] Whitehead to council and directs that an investigation be conducted into the matter.”

Cape Town mayor Patricia de Lille has been implicated in covering up a top city official’s wrongdoing after an independent investigation commissioned ...
Politics
4 years ago

Embattled Cape Town mayor Patricia de Lille will know her fate at the beginning of 2018 after the DA agreed to grant her an extension to provide ...
Politics
4 years ago