De Lille breaks down as pastors pray for her 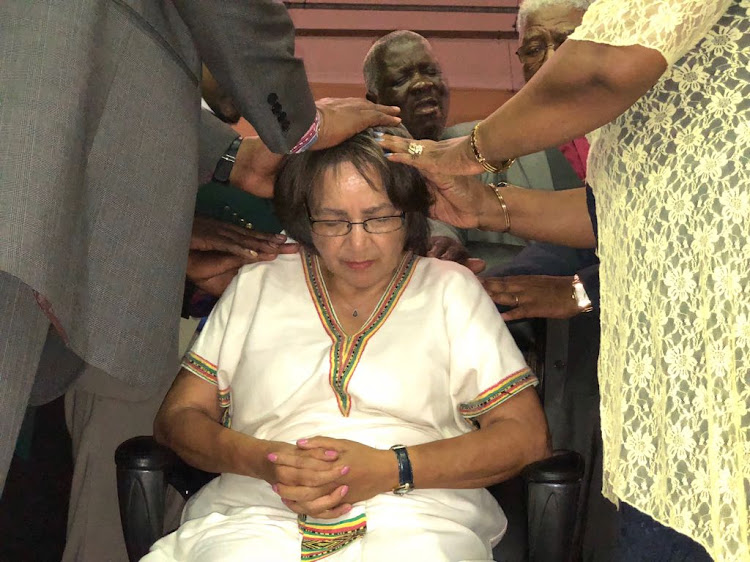 Pastors in Langa lay hands on Patrica Lille as they pray for her on Sunday.
Image: Esa Alexander

Cape Town mayor Patricia de Lille wept on Sunday as pastors at a church in Langa laid their hands on her head to pray for her.

The mayor told worshippers: "While people are sitting somewhere to decide what to do with me‚ let us pray for them‚ that the Lord will give them wisdom.

"Let God give them the minds and the brains to be honest‚ and to speak the truth."

De Lille told the congregation: "Hundreds of South Africans have reached out to give me support‚ and I will always remember the day when I walked into this church‚ the way I have now come before men and women of God."

In a tacit message to the federal executive‚ she said: "My name is synonymous with fighting corruption. I am not corrupt. If they have any evidence that I have put any money in my pocket‚ then they must come and bring the evidence.

"The only thing that I'm asking for‚ and I'm not asking for a lot or for favours from anyone‚ I'm only asking for a fair trial. Charge me if I have done something wrong... but don't find me guilty even before you have charged me."

A church in Cape Town gave mayor Patricia de Lille a hero's welcome on Sunday as it held a prayer service for her as the DA federal executive met to ...
Politics
4 years ago

Posters saying "Hands off the people's mayor"‚ "Mama de Lille 4 Cape Town" and "Mother of the poor‚ De Lille where you go we go" were waved as De Lille entered the church.

The federal executive - the DA's decision-making and disciplinary body when the party congress and council are not in session - was meeting to discus the report of a sub-committee chaired by parliamentary chief whip John Steenhuisen.

The sub-committee investigated numerous allegations of division in the City of Cape Town's DA caucus and on Sunday the federal executive was scheduled to discuss De Lille's arguments for why she should not be fired as mayor.

De Lille has proposed a mediation process involving all caucus members in a bid to save her job.