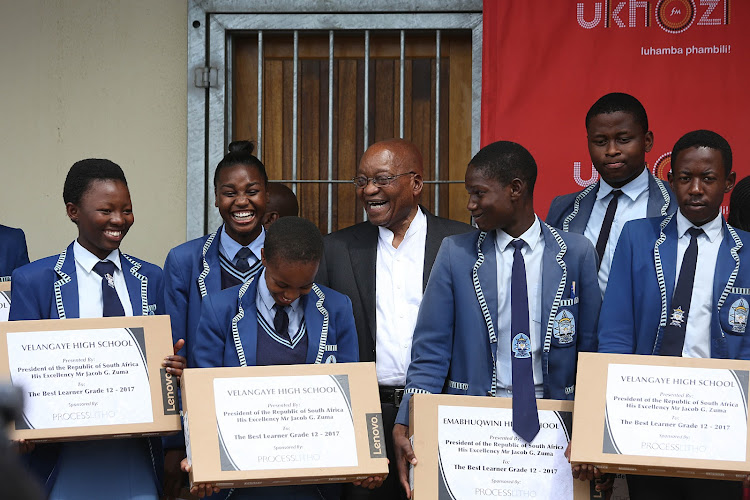 President Jacob Zuma has ordered officials to stop government programmes "that won't take us anywhere" and divert their money to free education.

The president made the bold statement during his visit to one of top performing schools in his hometown of Nkandla‚ northern KwaZulu-Natal‚ on Wednesday.

"You can't say there is no money for education. I've told those who are looking at the finances to stop other government programmes to get money for free education because there are things that won't take us anywhere‚" he said.

However‚ he did not specify exactly which government programmes he was referring to.

Zuma surprised many when he announced before the ANC's 54th national elective conference in Johannesburg in December that government will subsidise free higher education for poor and working class students in 2018. Even then‚ he did not explain where the money to fund free higher education would come from.

Zuma on Wednesday described education as the "weapon for everything"‚ saying it should be the solution for nation-building.

Look closely. Slowly but surely the academic and organisational cultures of our universities are being broken down in front of our very eyes.
Ideas
4 years ago

"Education is a treasure that cannot be taken away from you. When you get educated‚ you're not just doing that for yourself [and] your family‚ but for the nation‚" he said.

He said that although he was not educated‚ he liked education. But when he lost his father while he was still young he did not get a chance to continue formal studies.

Zuma added that he did not like people who went to urban areas after being educated and forgot about where they came from.

That is why I build a home in Nkandla even though now I am being arrested for building my home. I built my own home. But some say he can't build such a big home in Nkandla. You must be arrested because you are building your father's home. I am happy when I am home."

He was referring to his controversial R246-million Nkandla home which became the subject of an investigation by former Public Protector Thuli Madonsela‚ after taxpayer money was spent on security upgrades.

Zuma was accompanied by former SAA board chairwoman Dudu Myeni‚ who is the chairwoman of the JG Zuma Foundation.

Bhuqwini High School principal Zitha Shelembe attributed his school's remarkable achievement to the "collective" effort of his teachers‚ learners‚ parents and the community.

South Africa is pushing ahead with a plan to offer free university education to students from poor households and will announce funding details in ...
Politics
4 years ago

"We've been working together and I think this is a great achievement. It's a collective achievement for teachers‚ learners‚ parents and the community."

"I think we are moving up. Today we are so happy that everyone is here to applaud and congratulate us for our good results that we produced in 2017."

One of the school's Top 10 achievers‚ Nkosikhona Mchunu‚ 19‚ attributed his her success to hard work and burning the midnight oil.

"We started school at 6:30am before the 7:45am normal staring time and knocked off at 3pm. But we came back at night and did extra classes on Saturdays and Sundays‚" she said.

"I am happy because I won't be sitting at home because I have to attend to the situation at home when I finish my studies as no one is working‚" she said.

Zuma also visited another top performing school in Nkandla‚ Bizimali High School‚ which achieved an 88% pass last year. His visit to Velangaye High School‚ also in Nkandla‚ had to be postponed because of time – the school’s Top 10 achievers were invited to Bhuqwini High School where Zuma congratulated them for achieving 87%.