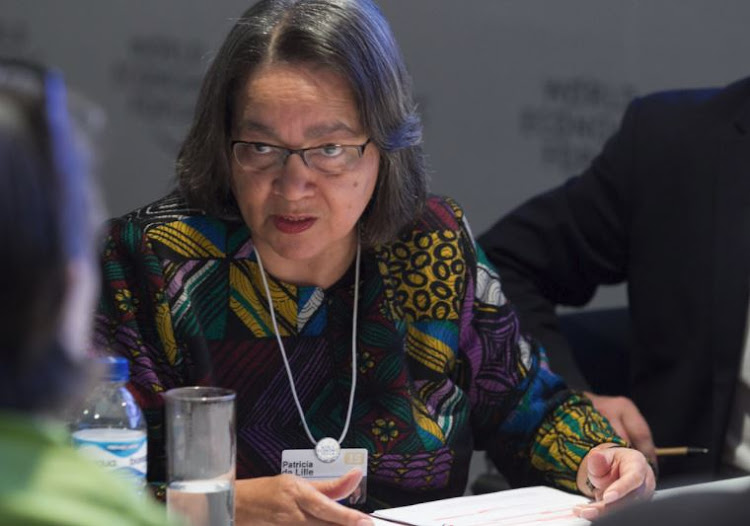 Patricia de Lille did not hold back in her 266-page file. She accused DA leader Mmusi Maimane of double standards and told the court about the “various attempts by the faction opposed to me to discredit me or get rid of me”.
Image: World Economic Forum / Greg Beadle/Government of SA via Flickr

The tensions between Cape Town mayor Patricia de Lille and the DA have exposed the party’s dirty linen in court papers.

De Lille‚ whom the ANC hopes to overthrow on Wednesday through a motion of no confidence‚ has approached the High Court in Cape Town to challenge the DA federal executive’s acceptance of a document known as the Steenhuisen Report‚ as well as certain parts of the report.

The document was compiled by a sub-committee‚ chaired by chief whip John Steenhuisen‚ which was set up to investigate “issues causing tension in the City of Cape Town caucus”. Last week‚ the caucus voted by 84 to 59 in favour of a motion that De Lille should be relieved of her mayoral chain.

De Lille does not hold back in her 266-page file. She accuses DA leader Mmusi Maimane of double standards and tells the court about the “various attempts by the faction opposed to me to discredit me or get rid of me”.

Cape Town mayor Patricia de Lille will face her latest battle for survival on Wednesday when she is expected to answer for R47-million in “irregular ...
Politics
3 years ago

She says she resigned as DA provincial leader in January last year in order to focus on “my role as mayor of Cape Town”. But the following month she was accused of leaking party information to the media.

The information related to disciplinary measures taken against councillors Shaun August and Matthew Kempthorne‚ who had collected over R2-million in pledges for T-shirts to be used in the 2016 local government election campaign.

They ordered 34‚000 T-shirts but some of the pledges were not paid on time and there was a shortfall of more than R421‚000 which the DA had to pay because the two councillors had given written undertakings to the supplier that it would do so.

De Lille said the pledges were eventually honoured and there was now more than R252‚000 in the “party’s ring-fenced account for the 2019 elections”.

The DA achieved 66.6% of the Cape Town vote but the celebrations were short-lived for the councillors as they were charged with misconduct. De Lille describes this move as “harsh in the extreme”.

Motion of no confidence looms for Patricia De Lille

“To compound the matters‚ August and Kempthorne were not represented by external legal advisers and then entered into a plea and sentence agreement‚ the final version which state as a ‘fact’‚ the insistence of [DA MP Glynnis] Breytenbach‚ I believe‚ that the undertaking given by August and Kempthorne to the supplier amounted to a fraudulent misrepresentation by them‚” the affidavit reads.

“What makes this strange is that this ‘fact’‚ inserted into the plea and sentence agreement‚ has no bearing on the charges they pleaded guilty to.”

De Lille said the admission of a “fraudulent misrepresentation” haunted August during his campaign for the provincial leadership – which he lost to Bonginkosi Madikizela - as it was “relentlessly used by his opponents” in the media‚ and the party’s top structures “took no steps to correct the false reporting”.

Says De Lille: “This related to a different instance of unauthorised expenditure in KZN. On the face of it‚ the contents of the email of Lees reveal double standards.”

But she denies “instructing‚ encouraging (or discouraging)” the leaking of the e-mail to Rapport newspaper‚ which published the story.

In a letter to De Lille‚ federal council chairman James Selfe said: “You will appreciate that if true‚ these statements would imply that you were complicit in a deliberate attempt to leak sensitive documentation‚ including a communication from Alf Lees‚ to the media.

“There is no doubt that the media report‚ and the subsequent publicity to which it gave rise‚ damaged the party.”

De Lille says this was the party’s first attempt to subject her to disciplinary proceedings but she was not charged. She says she was surprised when the matter appeared in the Steenhuisen Report.

She also accuses mayoral committee member for safety and security JP Smith of trying to discredit her through probes by the city council Special Investigation Unit (SIU). She says this resulted in “rumour-stirring and speculation regarding the legality of security upgrades at my home in Pinelands”.

De Lille says Smith leaked his submission to the sub-committee in “which he made certain false averments about me … that I closed down the SIU because I was involved in illegal activities and I was worried the SIU would uncover these”.

She says the federal executive and Maimane did not take action against Smith when his letter appeared in the media‚ and she was forced to release a media statement in response.

“Almost immediately after the publication of my press statement‚ on 3 October 2017‚ the leader summoned Smith and myself to a meeting‚” the affidavit states.

“It is at this meeting that‚ when confronted by the leader‚ Smith admitted that he had circulated the letter containing the allegations against me to MPs.”

DA provincial leader Bonginkosi Madikizela said the party was defending the lawsuit‚ which is expected to be heard in May.

On the ANC motion of no confidence in De Lille‚ he said although DA policy prevents councillors from voting with opposition‚ the Constitutional Court judgment allowing MPs to vote with their conscience supersedes the policy.

De Lille funds her own legal guns in battle with DA

Embattled Cape Town mayor Patricia de Lille is worried her own party might plot with the ANC to snatch the mayoral chain from her next week.
Politics
3 years ago

“Subsequent to the DA constitution‚ there is the Constitutional Court judgment which overrides any policy position‚” said Madikizela.

“Remember‚ the court said you can’t take members to task for voting with their conscience. We were talking about that as the DA is saying that we must take that judgment into consideration and change our constitution.

“The DA caucus voted and the process is that the outcome is taken to the federal executive‚ which is the highest decision-making body between congresses. We debated this and said we cannot impose a leader to the caucus who has clearly lost the confidence of the caucus.”