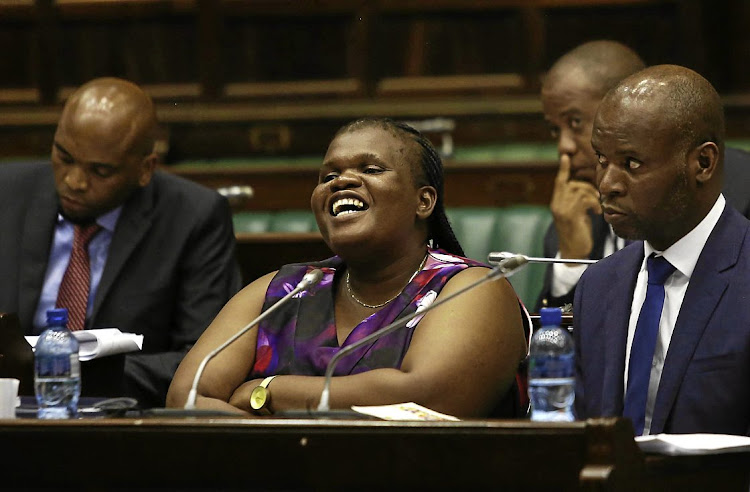 Minister Faith Muthambi has been accused of using the festive season to go on a recruiting spree, and now runs a bloated office. File picture.
Image: Esa Alexander

Public service minister Faith Muthambi is running a bloated office, with her ministerial staff at least three times higher than the number of personnel ministers are allowed to hire.

Times Select can reveal that, based on claims by officials in her department, she quietly expanded her office during the festive season. Her hiring spree included recruiting one official to a post that did not exist neither in terms of the ministerial handbook nor the organogram of her department.

This is not the first time Muthambi has been in trouble for catering for large numbers of people.

Last year she had to defend herself when the Sunday Times revealed that she flew 30 of her friends and relatives to Cape Town at a cost of R300,000 to attend her budget speech. She has also told Parliament, according to reports, that she sees nothing wrong with hiring family members to work for her.

Responding through her acting director-general William Vukela, Muthambi denied she had a staff compliment of 40 people, but did not offer another figure.

For the full story on our new Times Select site click here.

Since the publication of this report, the minister has subsequently given TimesLIVE the following comment regarding the alleged hiring spree. Read it in full:

"We note with regret the article by Thabo Mokone published on, 2 February 2018, 'Faith Muthambi goes on festive hiring spree'.

“ 'Repeat a lie often enough and it becomes the truth', is a law of propaganda often attributed to the Nazi Joseph Goebbels. I am not so sure where Thabo Mokone draws his own inspiration from. This is a classic display of lazy journalism because the facts were provided to Mokone by the office of the Minister on filling those funded vacant positions.

"Without sounding like a broken record, once more, this spurious and unfounded allegations, are a rehash of what the Minister has already answered to successfully, both in parliament and in the media. By brushing off Minister’s response in favour of sensationalizing and creating an impression that the Minister is the law unto herself does not serve any justice.

"We wish to repeat for the record, again, that the Minister has not deviated from the law and regulations provided for in the Ministerial Handbook.

"Perhaps the day Mokone takes the trouble of visiting the Ministry of Public Service and Administration, he will notice that there are four, as in 4, offices in the private office of the Minister, and not 40 as alleged.

"As the custodian of setting norms and standards in the public service, the Minister cannot violate her own Ministerial Handbook guidelines that she is supposed to adhere to and implement across government.

"It appears that Mokone and his informers, any mention of Minister Muthambi’s name, provokes total contempt in them.

"There is no attempt of honesty in the series of articles published hitherto, but sheer mission of personal vendetta against the Minister. This obsession with the Minister seems incurable at best.

"This highest level of desperation to fill up the newspaper where there is no story is regrettable. The quest to report truthfully has been halted by sheer laziness because the truth states otherwise.

"As and when staff in the Ministry develop other interests or move to other posts, they are bound to be replaced in line with the rules provided for, and this was the case."