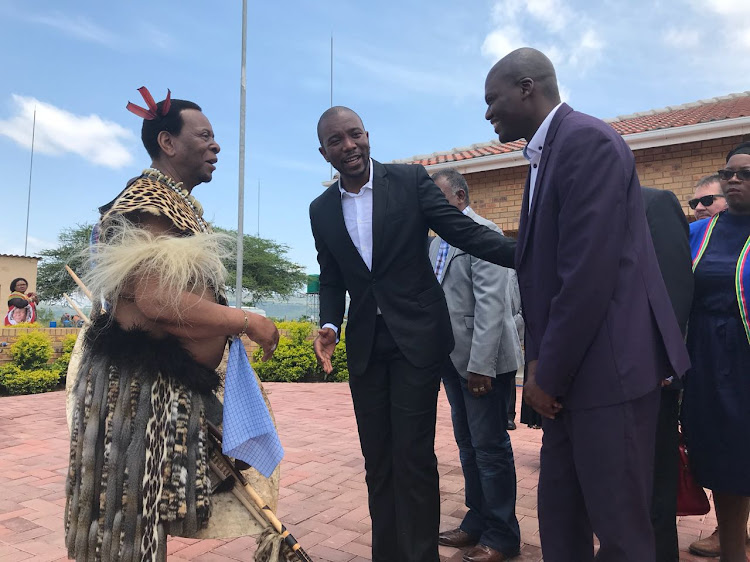 The newly-elected leadership of the Democratic Alliance in KwaZulu-Natal was presented to Zulu King Goodwill Zwelithini at his Osuthu Royal palace in the northern reaches of the province on Sunday.

Partly leader Mmusi Maimane accompanied the delegation to the palace‚ the foothold of Zulu custom.

This after the DA provincial congress was held in Durban on Saturday‚ which saw Zwakele Mncwango retain the party’s provincial leadership with his deputy Mergan Chetty.

Francois Rodgers was elected as provincial chair‚ and Hlengiwe Shozi‚ Craig Millar and Shehana Kajee as his deputies.

Maimane presented the monarch with several head of cattle as a gesture of goodwill‚ saying that it was the greatest privilege to have an audience with the king.

“We need to see development in rural communities and ensure that young South Africans from the rural areas are able to get a decent education‚” he said.

“We must engage with Ingonyama Trust and we must engage about land. This is not a question of state land‚ but rather one of land which is from here and what is right and just.

“I have come here to honour the lineage and heritage of this royal house and we will continue to recognise your majesty and the role he plays in society.”

Zwelithini said that it was the first time in history that the DA had come to “introduce itself”.

“Most political parties are making sure that they are known to his majesty these days‚” he said.

Zwelithini said that the Zulu nation had played a role in shaping the history of the country‚ even predating the current political dispensation. "We do not exist as a kingdom at the behest of any political party. While I acknowledge you are a leader of the official opposition‚ but to me when I look at you‚ you are my son."