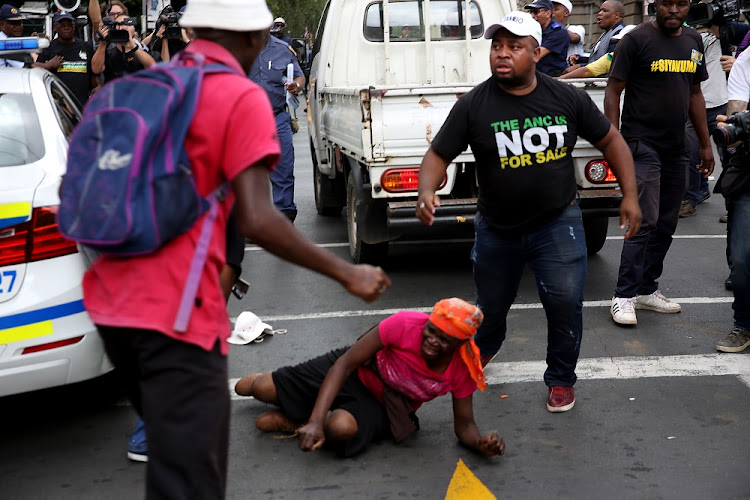 A man believed to be Thabang Setona, who is the ANC branch secretary of Ward 62, is seen assaulting a woman , who was riding on the bac of a vehicle. Earlier he said that if the Black First Land First (BLF) wants the president of the county, they must go to Union Buildings. He said "here we have the president of the ANC, Cyril Ramaphosa."
Image: ALON SKUY

The Joburg ANC region has condemned an assault on a woman by a secretary of one of its branches during a protest outside Luthuli House in the inner city.

“As the ANC in Joburg we strongly condemn any acts of violence against any person‚ more so women. The ANC Greater Joburg does not subscribe to the notion of people violently assaulting those who hold contrasting political views. Thabiso Setona’s acts do not represent what the African National Congress stands for and‚ as a consequence of his revolting behaviour‚ he will face a disciplinary process hastily‚” said regional spokesperson Jolidee Matongo.

Clashes broke out outside Luthuli House in Johannesburg on Monday when a van carrying a group of people in Black First Land First (BLF) regalia were attacked as the vehicle approached the main entrance of the building.

The BLF group got more than they bargained for as they were assaulted by ANC supporters‚ using fists‚ rocks and sjamboks and chanting songs critical of President Jacob Zuma.

It took a heavy police contingent to separate the ANC and BLF supporters.

The truck driver‚ who was also about to get a beating‚ managed to escape after they failed to remove him from the vehicle. His door was kicked and wipers removed before the police came and cleared the way for him to speed off.

Earlier‚ the group also attempted to attack a BLF supporter who was walking near the ANC headquarters. But he was also rescued by members of the Johannesburg Metro Police Department and the South African Police Service.

ANC supporters came out in their numbers on Monday to counter a "Hands off Jacob Zuma" protest‚ led by BLF and other organisations.

A video showing Setona attacking a woman who was already on the ground was captured by TimesLIVE.

Clashes broke out outside Luthuli House in Johannesburg on Monday 5 Febuary 2018, as a van carrying a group of people in Black First Land First (BLF) regalia were attacked as the vehicle approached the main entrance of the building.

Clashes broke out outside Luthuli House in Johannesburg on Monday as a van carrying a group of people in Black First Land First (BLF) regalia were ...
Politics
3 years ago

President Jacob Zuma must vacate the Union Buildings with immediate effect and stop putting a "nonsensical" ultimatum to the ANC top six.
Politics
3 years ago

As pressure mounts for President Jacob Zuma to vacate the Union Buildings in Pretoria‚ the South African Unemployed Workers Union and other ...
Politics
3 years ago