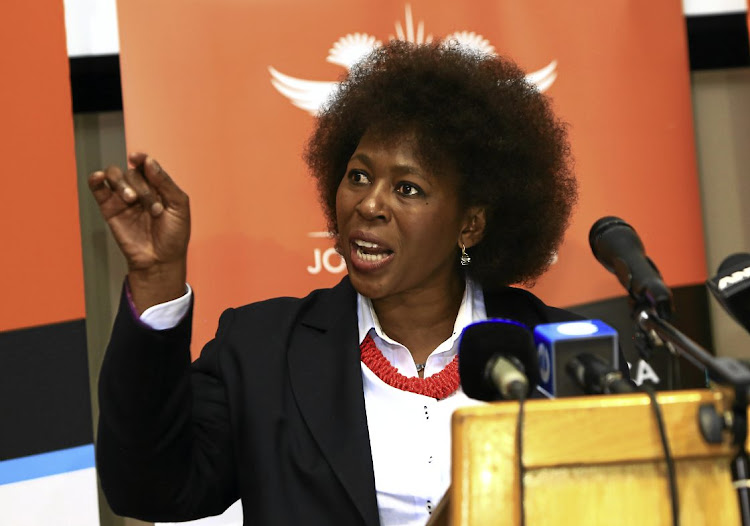 Makhosi Khoza said Cyril Ramaphosa was the same man who failed to stand up for her when she was 'persecuted' by the ANC
Image: Simphiwe Nkwali

Former ANC MP Makhosi Khoza says that a billionaire politician is not the way to take the country forward‚ taking a dig at the newly elected president of the ANC‚ Cyril Ramaphosa.

Khoza‚ who has founded the African Democratic Change party‚ was speaking to the news outlet Polity on Monday.

She said the country has “to be careful about allowing a democracy to be reduced to the consensus of the moneyed.”

“I think it is very important for us to understand that if we want to sustain democracy in South Africa‚ it should not be about a billionaire politician‚” she said.

As Cape Town mayor Patricia de Lille enters the ring to fight for her political life‚ she can count on two esteemed politicians being in her corner.
Politics
3 years ago

Khoza said Ramaphosa was the same man who failed to stand up for her when she was “persecuted” by the ANC. Khoza said when she was receiving death threats and ended up resigning from the party‚ the only thing Ramaphosa said to her was “keep safe.”

She expressed her lack of faith in the president of the governing party.

“I see no courage in such a man and I honestly don’t believe that he has the kind of courage that you need to take this country forward. It’s not like your Steve Jobs ... for him to become a billionaire he had to invent something. I don’t know anything that Cyril has invented. Because even the MacDonald’s burger that he’s a shareholder of is a franchise that somebody else invented in America. It’s not his idea. Lonmin mine is not his idea‚” Khoza added.

Lobby group Future South Africa has called on ANC president Cyril Ramaphosa to ensure that President Jacob Zuma does not deliver the State of the ...
Politics
3 years ago

In the light-hearted interview‚ Khoza mentioned that her party was facing financial problems as potential sponsors turned their backs on her to support Ramaphosa.

She said that business was giving Ramaphosa a chance in the hope that he will “rescue” the economy.

Khoza did not miss the opportunity to take aim at President Jacob Zuma‚ saying that she would only support Ramaphosa when “he is prosecuting the people‚ if he’s not going to strike a deal with Zuma. You know‚ because I suspect that he is not going to send Zuma to jail.

“As far as I am concerned‚ if we want to deal with this cancer of corruption‚ Zuma must replace his designer suit with that orange overall. That prison overall. So that it sends a strong message to everyone that corruption does not pay. If he does that‚ I would still support Cyril. Not necessarily going and supporting the ANC‚” she said.

Rand remains under pressure as Zuma refuses to step down

The rand remained under pressure on Monday morning‚ although slightly firmer from overnight weaker levels‚ amid reports that President Jacob Zuma had ...
Business Times
3 years ago

President Jacob Zuma is sticking to his opinion that he has complied with all legal instructions and will not be relinquishing the top job‚ according ...
Politics
3 years ago