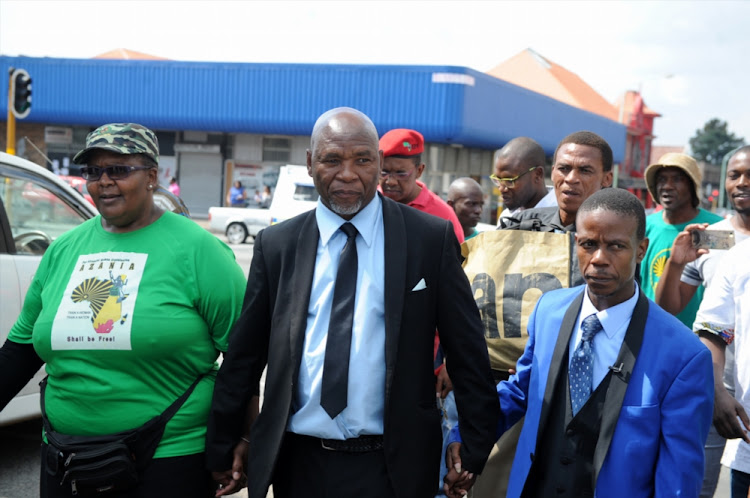 The Department of Correctional Services confirmed the re-arrest on Friday‚ saying that it was done because Motsamai joined protesters outside the military veterans department in Pretoria earlier in the week.

"Parolee Motsamai was arrested in the early hours of today [Friday] for breaching Section 52 (7) of the Correctional Services Act 111 of 1998. He violated his house arrest parole conditions by leaving the magisterial district‚ without permission from the Boksburg Community Corrections‚ on 07 February 2018‚" said department spokesperson Ofentse Morwane.

"In terms of our preliminary investigation‚ the parolee left the magisterial district to Hatfield in Pretoria under false pretence‚ where he indicated that he was going to attend to pension matters of his children. Instead‚ he went to join a join group of protesters outside the buildings of the Department of Military Veterans‚ where he also seen addressing them on 08 February 2018. It is alleged that during the protest he also behaved in a violent manner that threatened the well-being and security of the officials at the Department of Military Veterans."

Motsamai had served 27 years and 11 months behind bars for the killing of a white traffic cop in 1989. The officer was killed amid a bank robbery sanctioned by the PAC

Motsamai had served 27 years and 11 months behind bars for the killing of a white traffic cop in 1989. The officer was killed amid a bank robbery sanctioned by the PAC. The proceeds from the robbery were to assist the PAC in its activities. He was 26-years-old when he was arrested and had just returned from Ethiopia after military training.

Prior to his release‚ Motsamai had served six months on day parole which meant he could leave the prison in the morning and return in the afternoon. His movements were tracked via a monitoring device.

The conditions for his release permitted him to find a job or find employment. Pastor Paseka Motsoeneng‚ known as Mboro‚ donated R40,000 towards a carwash business for Motsamai in Katlehong on the day of his release. The business reportedly collapsed a few months later.

Motsamai was one of the political veterans who were awarded a state-funded house. The state-funded house given to him was in Daveyton. In an interview with The Star last month‚ he was quoted as saying that the house “was more like a toilet”. He told the paper that the Department of Military Veterans built him another house in Golden Gardens but it turned out to have roof leaks and had no electricity. He was not living in the house.

PAC's Kenny Motsamai back in prison

The Pan Africanist Congress' Kenny Motsamai‚ who claimed to be the longest-serving political prisoner in South Africa‚ has been rearrested‚ the ...
Politics
3 years ago

IN PICTURES: Pastor Mboro and his BMW i8 steal the show