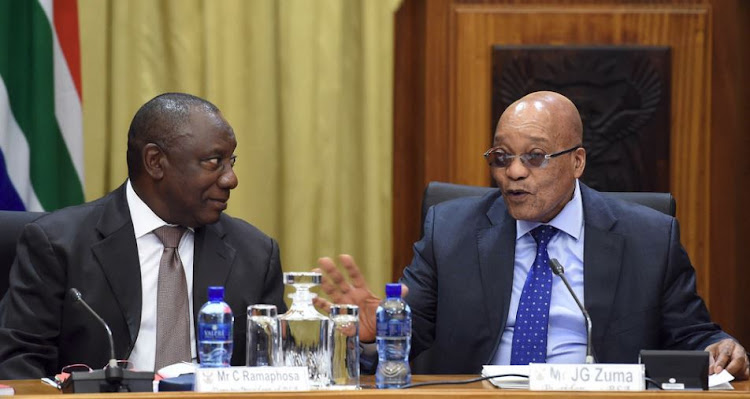 The African National Congress's (ANC) top leadership has decided to recall President Jacob Zuma as head of state‚ with no deal and an ultimatum.

The final decision was taken after a 13-hour marathon meeting that lasted into the early hours of Tuesday morning and was due to be formally communicated to him in writing.

To give effect to the decision of the committee‚ Zuma has the day to resign from office in compliance with the decision taken by the National Executive Committee (NEC). If he refuses‚ he would face a motion of no confidence against him in Parliament.

Last night‚ ANC president Cyril Ramaphosa left the NEC meeting alongside ANC secretary general Ace Magashule and briefly met with Zuma at his Mahlamba Ndlopfu official residence in Pretoria. They had communicated an ultimatum of a day for Zuma to leave office‚ a source said‚ but Zuma gave no indication of compliance.

At midnight‚ the pair returned to the NEC meeting in Irene‚ where there were further deliberations on the end of Zuma’s tenure and the way forward for the ANC. By the end‚ it was decided that Zuma be recalled – a party decision that has no legal standing.

Jacob Zuma’s change in fortune, from a rape trial to election as ANC leader, was the beginning of a struggle in which he usurped the machinery of ...
Opinion & Analysis
4 years ago

Magashule is expected to formally communicate the outcomes of the meeting to journalists at noon on Tuesday.

An insider told TimesLIVE that‚ whichever way Zuma opts to leave‚ the process is now left to Parliament to finalise within the next two days.

Sources said there was unanimity on the recall decision but some expressed their regret that a negotiated exit for Zuma initiated last week by Ramaphosa was unsuccessful.

The NEC heard that Zuma had agreed last week that he would resign but sprang on Ramaphosa a list of conditions‚ which included that he stay in office for three months during a handover period. The NEC rejected the conditions.

“There is no deal. Everything is off. He has to go‚” a source said early on Tuesday.

Opposition parties in Parliament have called for the motion of no confidence in President Jacob Zuma‚ scheduled for February 22‚ to be brought ...
Politics
4 years ago

'A good leader leaves when his time is up': A nation tweets for #Zexit

While the nation holds its breath as the ANC's national executive committee meets in Irene‚ Pretoria‚ to possibly decide the fate of President Jacob ...
Politics
4 years ago