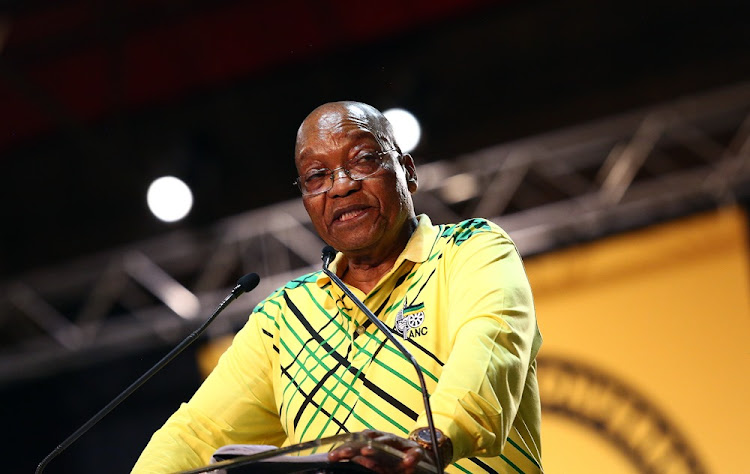 This is what President Jacob Zuma had to say to his detractors and specifically to members of the ANC's national executive committee (NEC), who resolved that he should be recalled from the Union Buildings.

In an interview with SABC TV on Wednesday at his official residence in Pretoria‚ Mahlamba Ndlopfu‚ Zuma said he would only resign if the ANC top brass could tell him what he had done wrong.

"I indicated to the top six that what they have raised is not the first time. They have raised it in the NEC itself twice and nobody has ever been able to tell me what the issue is. The NEC themselves said that I must resign‚ and I find that very strange that I should do so because this is not the first time that they've said this‚" Zuma told the SABC's Mzwandile Mbeje.

As the country waits to see if President Jacob Zuma will resign, the Hawks launched a raid on the Guptas compound in Saxonwold. Follow all the live ...
Politics
3 years ago

"In the discussion‚ I asked‚ 'What was the problem? Why must I be persuaded to resign? Have I done anything wrong?’

"And of course the officials [must] provide what is it that I've done‚" he said.

Zuma said he told the top six that one of the problems was that his possible resignation had been raised in the structures of the ANC and nowhere else.

He said he would resign only if the top six could furnish him with reasons why he should do so‚ explaining what he had done wrong.

"At the discussion in the NEC nobody was able to tell me what I've done. There's no policy in the ANC and there's nothing that [says] once there is a new president of the ANC‚ there must be changes‚" he said.

The NEC has called for Zuma to step down as the head of state‚ about 18 months before his term of office officially comes to an end.

Zuma said one of the reasons given for his recall was that there were two centres of power. He said this was not true.

“I say it is not the policy of the ANC … immediately there is a new president there must be a changeover.

“The job of the new president (of the ANC) is to take over the leadership of ANC at headquarters and prepare for the election in the next 18 months. This has been the accepted practice of the ANC. The president will then lead the organisation in the election campaign‚” Zuma said.

He said after winning the election‚ the ANC president would then get elected in Parliament as president of South Africa.

Zuma said the talk of two centres of power came at a time when former president Thabo Mbeki was contesting for the third term as ANC president in 2007.

ANC caucus agrees to pass motion of no confidence against Zuma

The ANC parliamentary caucus on Wednesday has agreed to table a motion of no confidence against President Jacob Zuma on Thursday.
Politics
3 years ago

He said that would have meant the ANC would have found itself with two presidents - the ANC president and the president of the country - for the period of five years if Mbeki had been re-elected ANC president.

Zuma said it was established practice in the ANC for a former ANC president to continue as president of the country.

Zuma said when he defeated Mbeki to become ANC president in 2007‚ Mbeki continued to be president of the country.

Zuma said the NEC decided to recall Mbeki in 2008 because it felt there were specific things Mbeki was doing.

WATCH | Zuma breaks his silence: Have I done something wrong?

President Jacob Zuma is responding to the recent developments in an interview with the SABC at his official residence in Pretoria.
Politics
3 years ago

“There was no complaint that there were two centres of power‚ precisely because there is no problem about it.”

Zuma said the decision to remove Mbeki as president of the country in 2008 caused more problems for the ANC as some members left and formed the Congress of the People.

Zuma also said he was not defying the leadership of the ANC but was disagreeing with its decision to recall him.

He also said he had been portrayed in the public as this person who had defied the leadership.

“I have never defied the leadership. I said here I do not agree .. because there is no evidence. I did not defy. I disagreed with the decision because I feel the decision is not right.”

No secret ballot in motion of no confidence against Zuma

The motion of no confidence against President Jacob Zuma will not be done in secret‚ ‚ the ANC announced on Wednesday.
Politics
3 years ago

Amid calls for President Jacob Zuma to vacate office‚ his allies on Wednesday woke up to a raid by the Hawks: but what does the timing of the ...
Politics
3 years ago

EFF abandons plans to force motion of no confidence against Zuma

The Economic Freedom Fighters on Wednesday said it had abandoned its plans to take the matter of a motion of no confidence against President Jacob ...
Politics
3 years ago
Next Article