We will tell Zuma what he did wrong‚ says ANC 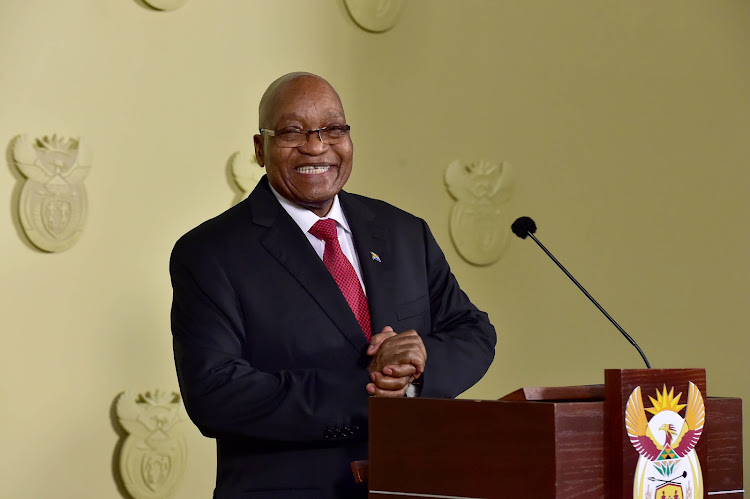 The ANC has promised to explain to former president Jacob Zuma exactly what he did wrong.

On Wednesday night‚ ANC deputy secretary-general Jessie Duarte addressed a media briefing about 15 minutes after Zuma had resigned as head of state‚ effective immediately‚ during a televised address.

Duarte said members of the ANC’s national executive committee (NEC) had provided reasons for the recall of Zuma but she would not state what those reasons were.

“We reiterate that our decision to impose a recall was taken only after exhaustive discussions on the impact such a recall would have on the country‚ the ANC and the functioning of government‚” she said.

Earlier‚ Zuma had communicated in his resignation speech that he disagreed with the decision to recall him as it was not based on tangible examples of what he had done wrong.

“He’s asked for reasons‚ which we feel we should give to him. The NEC had a very long discussion [and] reasons were forwarded in that discussion. I think that‚ really‚ in the interest of our organisation and the best interests of Comrade Zuma‚ the best place to advance and give that report is to him directly – not to the media‚” she said.

President Jacob Zuma resigned as leader of South Africa on Feburary 14 2018 during a televised address to the nation. Subscribe to TimesLIVE here: https://www.youtube.com/user/TimesLive

Duarte said the media were “not known for being sensitive” and for caring about people and their families‚ which was one of the reasons the information was not made public.

“It would be wrong to do so‚ it would be adventurous to do so … I don’t think we want to do that‚” she said. “Yes‚ we will sit down with him first and discuss what we believe might be the issues‚ before we venture into a slaughterhouse of opinion‚ yet again‚ by yourselves [the media] and the opposition.”

Parliament is expected to elect a new president by Friday or at an earlier time if the chief justice is available.

Duarte also confirmed members of the NEC would crisscross the country at the weekend to explain its decision to recall Zuma to its rank and file.

“We’re sending out all our NEC members to all 54 regions of the country to explain to the ANC membership why we took the decision that we took. We are not celebrating that we had to recall a cadre who has served for 60 years. We’re not celebrating tonight that he has considered all the issues and decided to resign‚” she said.

The ANC thanked Zuma for his service as head of state.

“President Zuma remains a disciplined member of the ANC‚” said Duarte. “In giving effect to the decision of the ANC NEC to recall him‚ President Zuma has reaffirmed his commitment to the principles‚ practices and character of the movement to which he has dedicated his life.

“Having taken the difficult decision to recall Comrade Jacob Zuma‚ the ANC nonetheless wants to salute the outstanding contribution he has made and express its profound gratitude to him for the role he has played in the ANC spanning over 60 years of loyal service.”

She admitted that Zuma’s rise through the party ranks – ultimately becoming the country’s first citizen – had not been incident-free‚ but said Zuma’s contributions could not be overlooked.

WATCH | End of an era: the life and times of Jacob Zuma

President Jacob Zuma has resigned as head of state. We look back at his time in the party and as president of the country.
Politics
3 years ago

“While we acknowledge errors and mistakes that were committed‚ President Zuma leaves a legacy of delivery in many critical areas – among them being the conceptualisation and delivery of the National Development Plan‚ a long-term plan towards our common prosperity and a first in our country. President Zuma’s passion for rural development saw his administration establish a dedicated ministry on rural development to further advance the ANC’s programme of land and agrarian reform‚” she said.

Duarte also credited Zuma for being at the helm of South Africa’s rollout of an antiretroviral programme; for taking the initial steps to launch the National Health Insurance plan; for the expansion of access to basic and higher education for the poorest of the poor; and for the “progressive implementation of fee-free higher education for the poor and working class”.

“President Zuma’s government has also rolled out a massive infrastructure investment programme‚ which helped sustain growth during an economic downturn‚ providing vital economic and social infrastructure. These are but some of the many achievements and strides made under his leadership‚” she said.

“The ANC extends its gratitude to President Zuma for having served the country in this capacity for the last nine years‚ particularly for the contribution he has made to progress in improving the lives of ordinary South Africans.”