Controversial painter hits again‚ this time with Zuma and his dogs 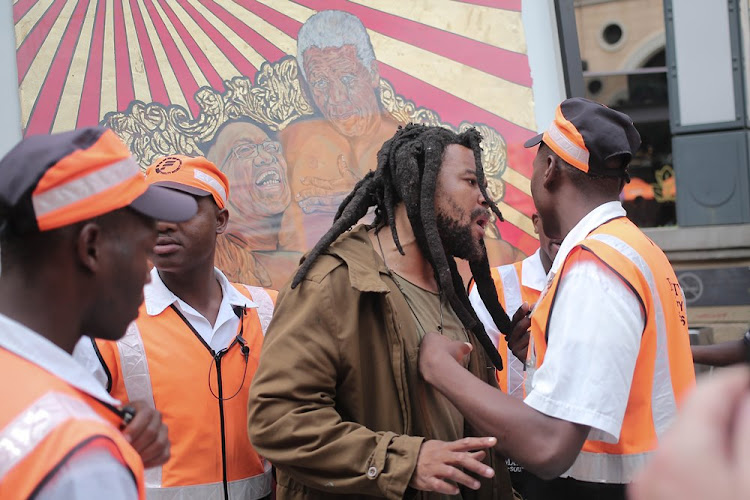 The controversial artist who painted an explicit artwork of then-president Jacob Zuma on Nelson Mandela’s lap made an appearance at the Sandton Nelson Mandela Square for an art installation on Wednesday.

Eastern Cape artist Andile Mabulu is no stranger to stirring controversy. While some find his work distasteful and disrespectful‚ there are those who applaud his courage. David Kutu‚ who witnessed the erection of the artwork‚ said the artist’s work is “not for the faint-hearted”.

“I derived this from the responses I saw from people‚ especially older people. Some were very [annoyed]. There was a mixed reaction but after asking him what he is trying to convey to the nation‚ you make sense of it all.”

In his explanation of the painting‚ Mabulu “made it clear that everything that former state president Nelson Mandela stood for‚ the Jacob Zuma leadership took away. Hence in one of his paintings‚ Mandela is in tears. That tore me apart as well‚” Kutu said.

In one of the installations a monkey was seated on a throne‚ with a chain seemingly meant to put Zuma's sons Edward and Duduzane on the leash - they were depicted as bulldogs in labelled white t-shirts. Close to the monkey was another bulldog labelled Khulubuse‚ Zuma’s nephew.

“He did explain the dogs. The main one on the throne is Zuma and his private part is cut off‚” said Kutu. Edward Zuma is known for his vigorous defence of his father in the media‚ while Duduzane is reportedly a beneficiary and middleman for the friendship between his father and the unpopular Gupta family.

“He is liberated and confident. He believes in freeing ourselves from fear of repercussions of our acts. While the leadership of Zuma boils him up to his last nerve‚ the well-spoken Mabulu articulates himself very well. He is the one we should stand in awe of for breaking the silence‚” Kutu said about the artist.

Anger and despair rippled through Nkandla on Wednesday evening‚ hours before Jacob Zuma resigned as president of South Africa.
Politics
3 years ago

Durban wax sculptor and painter Lungelo Gumede who captured Zuma and several others in wax and paint recently said buyers were not interested in his Zuma sculpture.

If you are an art fanatic‚ you should look out for the Investec Cape Town Art Fair‚ which runs from Friday 16 until Sunday February 18 at the Cape Town International Convention Centre.

Mabulu showcased his work on the same night the president rendered his resignation on live television.

*rolls eyes* Mabulu @AyandaMabulu is hardly an artist. Can we stop pretending his work is controversial and admit it's sophomoric and reductive. My pre-school finger paintings are deeper https://t.co/5xmabdYtrZ

I don't have a problem with his paintings but not when it comes to Madiba I mean the old man has passed on can't we just let him rest in peace not disrespect him in this kind of a way,I mean the whole world knows about Madiba and they respect him as an icon

Commenting on the issue‚ management of the Sandton Nelson Mandela Square‚ said the matter had been handed over to the police.

“Nelson Mandela Square is aware of the unsolicited‚ explicit imagery that was brought onto the property. It was removed immediately by the mall’s security team and the perpetrators were handed over to the police. This matter is subject to an official investigation. Any further details regarding this incident should be sought through the police.”

The mall is operating and trading as normal.