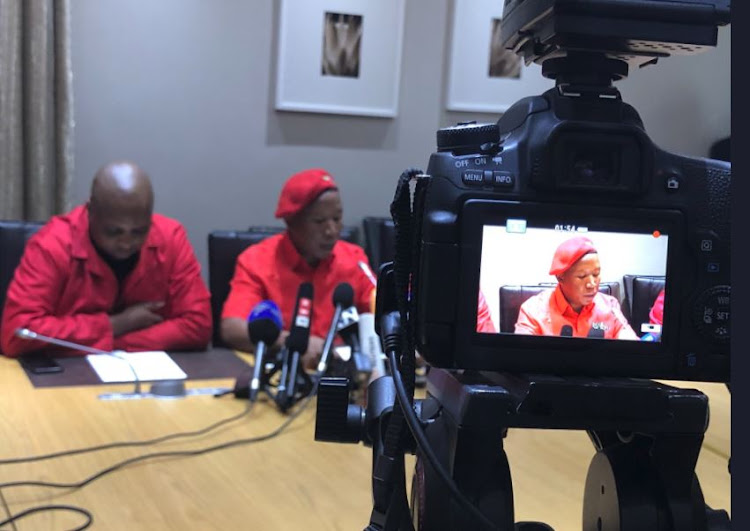 The Economic Freedom Fighters plans to table a motion to dissolve Parliament, EFF leader Julius Malema said on Thursday February 15 2018, adding that the party also wanted to have a peaceful state of the nation address.

on's vote for a new president and its reasons for wanting parliament to be dissolved.

A statement authored by the party's Mbuyiseni Quintin Ndlozi states:

"The EFF patiently and relentlessly fought against Jacob Zuma’s leadership of South Africa because he was a disaster‚ a post-colonial disaster who almost brought South Africa to its total collapse.

The EFF is not sympathetic to Zuma’s games of victimhood. He is a conman‚ and trickster who when caught in the wrong‚ plays victimhood with the aim of misleading the gullible into supporting him. We call on all South Africans to not fall victim of Zuma’s crocodile tears and victimhood games he plays every time he is in the wrong. South Africa‚ the whole nation has been a victim of a conman‚ an impostor for close to a decade and no one should fall into that trap again.

"The shenanigans of Jacob Zuma nevertheless reveal the massive weaknesses of the political party he comes from. The ANC is not an organisation that is capable of leading South Africa beyond political liberation. The ANC played an important part in political liberation‚ but it is totally incapable to lead society to economic equality and prosperity. The ANC is also incapable of fighting corruption and maladministration from within its ranks.

"If the ANC of Ramaphosa is honest and truly seeks a new and stable future‚ it must agree to the call for early elections. Because this parliament has been complicit in creating the personality cult that is Jacob Zuma and it must be dissolved to reconstitute a new leadership of South Africa with a fresh mandate from the general participation of our people through elections.

"The ANC has developed a tradition of building personality cults who are beyond reproach. In all these sins and shenanigans‚ the ANC was the shield that protected Jacob Zuma from being held accountable. The ANC defended Zuma even when the whole of society said he is a problem‚ so a permanent solution in south Africa will be to totally extinguish the ANC from political office.

"The EFF has no confidence in the entire leadership of the ANC‚ and therefore believes that even those who will be elected after Jacob Zuma will be nothing but substitutes in the same corruption game and competition . . .

"The EFF will therefore not participate in the election of a new President to replace Zuma because we do not want to legitimate anyone from the ruling party. As a result‚ at the first opportunity to lead a motion in parliament‚ EFF will call on the dissolution of parliament in favour of early elections. This is to allow our people to renew parliament's mandate through general elections and not some career driven elite pact.

"Furthermore‚ opposition parties should not be opportunistic and field candidates for position of President because none won elections and even when combined‚ do not constitute more than 50% of the vote.

"The EFF will however participate in the State of the Nation Address and will robustly engage all the issues that will be raised there. The EFF will not lower the bar concerning holding the executive accountable. Our robustness and forthrightness will remain intact . . ."

The rand was firmer at midday on Thursday‚ as the local currency continues to strengthen on positive sentiment following the resignation of Jacob ...
Business Times
3 years ago

What did Zuma do? The presidency explains

Many South Africans are celebrating Jacob Zuma’s departure‚ but his administration has a more flattering view of the outgoing president.
Politics
3 years ago

ANC chief whip Jackson Mthembu has instructed all of the party's 249 MPs to attend Thursday's special sitting of the national assembly to elect a new ...
Politics
3 years ago