Zwane fires official about to close Gupta-linked mine 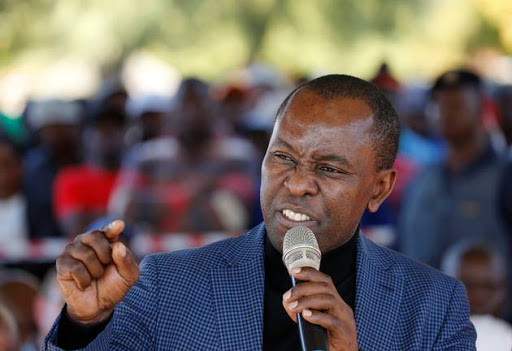 The Department of Mineral Resources dismissed its Mpumalanga regional manager‚ Aubrey Tshivhandekano‚ at the gates of the Koornfontein colliery‚ owned by the Gupta-linked Tegeta Resources‚ as he was about to issue the mine a notice for non-compliance with its mining rights.

National Union of Mineworkers’ (NUM) spokesperson Livhuwani Mammburu said the union was furious about Tshivhandekano’s dismissal on Thursday for standing up for workers’ rights at the mine where salaries were either late or partially paid.

The letter of dismissal handed to Tshivhandekano by department officials was signed by the department’s director-general‚ Thabo Mokoena‚ on the instruction of Mineral Resources Minister Mosebenzi Zwane‚ and was designed to stop the issuance of the notice‚ which could close the colliery‚ he said.

It is understood that Tshivhandekano had also recently visited the controversial Optimum colliery owned by Tegeta‚ where a similar notice was being prepared for non-compliance with its mining licence.

Members of the NUM were present at a recent meeting between Tshivhandekano and a senior Tegeta manager at Optimum the Tegeta official threatened to contact Zwane to prevent the notice being issued.

The dismissal was confirmed by a departmental source‚ who said the letter accused Tshivhandekano of sharing log-in details with a colleague.

This follows a protracted period of suspensions and disciplinary processes brought against Tshivhandekano in what the NUM called a process of harassment and efforts to remove "progressive" department officials who worked to improve employees’ conditions and "especially those dealing with Gupta companies for not adhering to the labour and mining laws of the country"‚ Mammburu said.

Tshivhandekano is one of three regional heads who applied to the Labour Court to stop a forced relocation to another regional office by the department. The move was seen as a way to put in more pliable regional managers who would give Gupta-linked companies an easier time in Mpumalanga and KwaZulu-Natal‚ where they were trying to buy further coal assets.

"We really are not happy with this situation and we want President [Cyril] Ramaphosa to dismiss Zwane and his director-general‚" he said.

Tshivhandekano is understood to be seeking urgent legal redress to overturn his dismissal.

Parliament’s portfolio committee on police has praised the Hawks for the progress made in arresting suspects linked to allegations of state capture.
News
4 years ago

Bail has been granted to eight accused in the Estina Dairy Farm scandal case which has embroiled mining minister Mosebenzi Zwane and the embattled ...
News
4 years ago

With a possible Cabinet reshuffle on the cards‚ one political analyst says the incoming president Cyril Ramaphosa cannot entirely have his way with ...
Politics
4 years ago

A number of civic rights organisations - under the banner of Future South Africa - have welcomed the call by the ANC national executive committee to ...
Politics
4 years ago