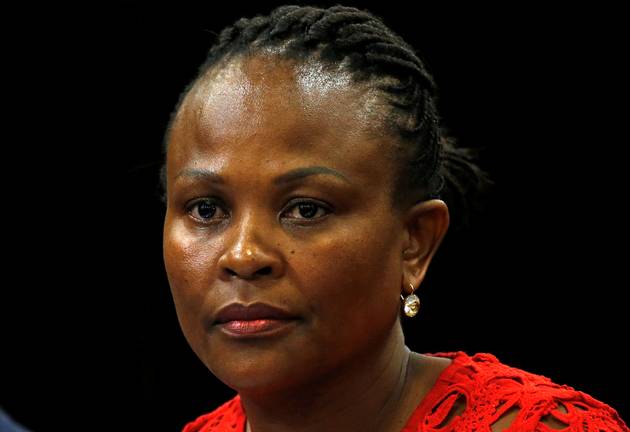 DA spokesperson for justice and constitutional development Glynnis Breytenbach said on Sunday the party had written to the Speaker of the National Assembly‚ Baleka Mbete‚ requesting that she expedite the process to remove Mkhwebane in terms of Section 194 of the Constitution.

She said this section stated that the public protector may be removed from office on:

(a) the grounds of misconduct‚ incapacity or incompetence;

(b) a finding to that effect by a committee of the National Assembly; and

(c) the adoption by the assembly of a resolution calling for that person’s removal from office.

“The Speaker must now see to it that the proceedings to have the Public Protector removed commence swiftly as Mkhwebane has repeatedly demonstrated that she is not to fit to serve as Public Protector. The decision by the High Court to set aside her Bankorp-CIEX report‚ in which she recommended that ABSA pay back R1.1-billion‚ was a damning indictment on her fitness to hold office.

“She clearly does not understand her role as Public Protector and misconstrued the powers of her office when‚ in the same report‚ she proposed that the Reserve Bank’s mandate be amended‚” Breytenbach asserted.

She said the DA had repeatedly called for Mkhwebane to be fired as Public Protector as having her at the helm had harmed the integrity of the office she holds.

“Just last week‚ Mkhwebane said the DA was ‘unpatriotic’ for criticising her work. Such remarks show that she is biased and that cannot be accepted from the head of a Chapter 9 institution.

“We have previously instituted the process of Adv. Mkhwebane’s removal through the Justice Committee but it was shut down by the ANC members that form part of this committee toeing the party line. Parliament can no longer sit idly by while this important office is rendered useless by the incumbent.

“South Africa deserves an objective Public Protector who is committed to upholding the rights of all citizens and defending them without fear or favour and Mkhwebane has proved she is not the right fit.

“The Speaker must now act with haste in order to ensure that parliament can do its work immediately by firing Mkhwebane which would begin to restore public confidence in this important institution‚” Breytenbach said.

Zuma to get his day in court

Former president Jacob Zuma is set to face the music —  soon he will be charged with the arms-deal corruption case and he might face ill-discipline ...
Politics
4 years ago

De Lille aims to clear her name with tell-all book

Embattled Cape Town mayor Patricia de Lille has decided to reveal everything about her skirmishes with the DA in a book.
News
4 years ago