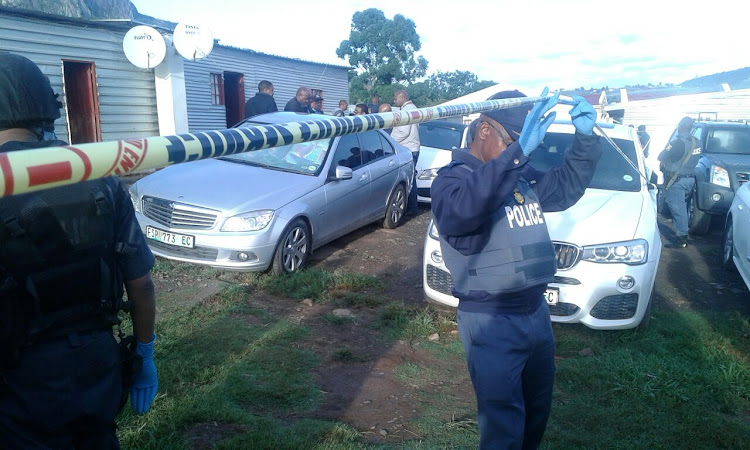 Police secure the area after a shootout between the Hawks and a suspected gang of police killers at a church in Nyanga village near Engcobo in the Eastern Cape on February 23 2018.
Image: SAPS

What happened at a police station in the Eastern Cape must never happen again‚ Police Minister Fikile Mbalula said on Saturday.

He commended Friday night’s takedown of those believed to be responsible for the massacre of six policemen and an off-duty soldier at the Ngcobo police station in the Eastern Cape on Wednesday.

“This tragedy will remain one of the worst moments of our democracy‚ where protectors of our democracy and people were under attack. What happened at Ngcobo must never happen again in our republic," Mbalula said.

A bloody exchange of gunfire in a churchyard in Nyanga village near Ngcobo on Friday evening left seven of the suspected cop killers dead.

Ten suspects were arrested and others escaped. One police officer was wounded and rushed to a hospital.

“The group‚ which uses a church as a hiding place‚ was cornered inside the church premises. A gun battle between suspects and police ensued which left seven suspects dead and a task force team member injured in the leg‚” the Hawks said in a statement.

“An unknown number of suspects managed to escape and are currently being sought by the police. A number of firearms have been confiscated‚” the statement added.

"I must thank the police for a job well done. They must continue to assert the authority of the state and affirm rule of law." Mbalula said on Saturday morning.

"Police arrested suspected criminals in a satanic place masquerading as a church. Our people must be vigilant and report these kinds of places. We urge our people to continue working with the police for a peaceful and prosperous South Africa‚" Mbalula added.

A bloody exchange of gunfire in a churchyard on Friday evening left seven suspected Engcobo cop-killers dead.
News
3 years ago