EFF to present draft resolution on land expropriation in Parliament 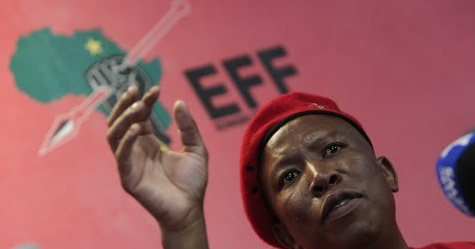 Economic Freedom Fighters (EFF) leader Julius Malema will on Tuesday lead a motion on expropriation of land without compensation in Parliament.

Eighty-five minutes have been set aside to consider the draft resolution at a plenary sitting of the National Assembly on Tuesday.

In the resolution‚ the party proposes that an ad hoc committee be established to review and amend Section 25 of the constitution to make it possible for the state to expropriate land in the public interest without compensation and that public hearings be held to canvass the views of ordinary South Africans‚ policy makers‚ civil society organisations and academics.

The ad hoc committee should‚ according to the EFF‚ comprise 11 members; six from the ANC‚ two from the DA‚ one from the EFF and two from other parties.

The party also proposes that there be “necessary constitutional amendments with regards to the kind of future land tenure regime needed‚ and to necessity of the state being a custodian of all South Africans”.

On Tuesday, the CIC @Julius_S_Malema will lead a Motion on Expropriation of Land without Compensation for Equal Redistribution at 14h00.

As the minister of finance prepares to account to South African taxpayers how government plans to spend their money‚ President Cyril Ramaphosa wants ...
Politics
3 years ago

These are the top 12 priorities outlined by President Cyril Ramaphosa in his state of the nation address.
Politics
3 years ago

The government will implement the expropriation of land without compensation.
Politics
3 years ago

Give land back to the dispossessed, certainly, but settle the tenure issue as well

Land issues in urban areas should be addressed through the release of government and municipal-owned land to build homes for people‚ ANC president ...
Politics
3 years ago