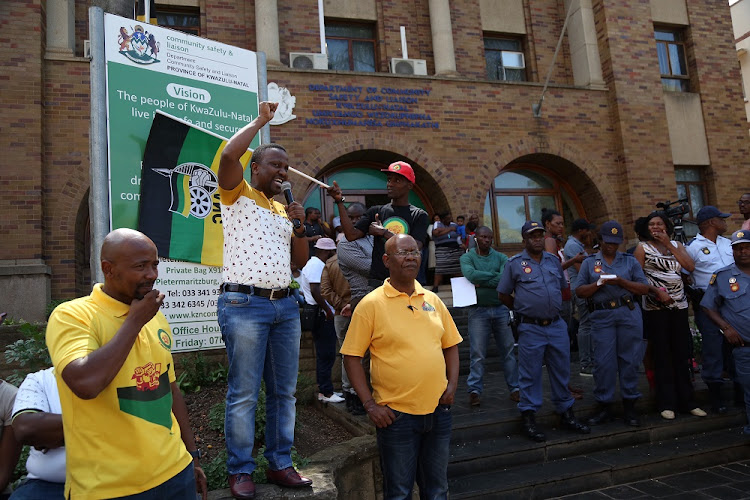 Mzi Zuma addresses ANC Youth League members after they hand over a memorandum about political killings in the province.
Image: Jackie Clausen

The ANC Youth League in Pietermaritzburg has called for the province’s Department of Community Safety and Liaison to investigate corrupt police officers who derail probes into political killings.

The league embarked on a march in the provincial capital on Friday to highlight the spate of political murders.

The protest comes as the R15-million Moerane Commission of Inquiry‚ established to probe the violence in KwaZulu-Natal‚ continues to sit.

Included in the Youth League’s demands was the increased oversight by the department when these killings were being investigated.

“We demand that the department plays its oversight role and oversee the functioning of the police as far as the investigation of political killings is concerned. Furthermore‚ we want them to facilitate a transparent process of auditing all dockets related to political killings‚” the memorandum read.

They called on the department‚ and its head Mxolisi Kaunda‚ to assess the effectiveness of individuals and the units investigating all these cases and the “deliberate attempts of defeating the ends of justice by police officers”. Mvuseni Mnqayi‚ head of provincial secretariat in the department received the memorandum.

Zulu King Goodwill Zwelithini has questioned the establishment of the Moerane Commission of Inquiry into political killings in KwaZulu-Natal and has ...
News
3 years ago

Hundreds of thousands of rand were spent on convening unscheduled by-elections following the deaths of councillors by unnatural causes in ...
Politics
3 years ago

The Economic Freedom Fighters (EFF) claims that it has been subjected to violent political intolerance in KwaZulu-Natal by the ANC.
Politics
3 years ago