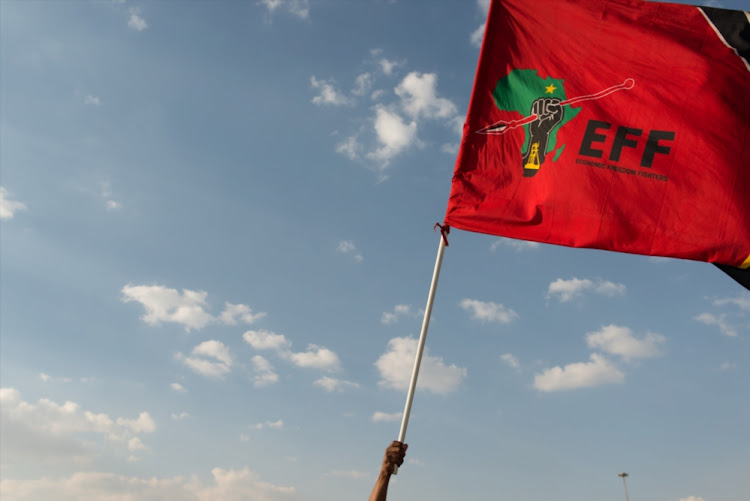 The programme of land occupation was adopted as an EFF programme at the EFF's very first National Assembly in December 2014.
Image: Gallo Images / Frank Trimbos

The Economic Freedom Fighters in Gauteng has taken responsibility for recent land invasions and challenged President Cyril Ramaphosa to bring it on with his law enforcement agencies.

Over the past few days, land invasions in Tshwane and Johannesburg have sparked widespread criticism from the provincial government and metros.

The EFF told TimesLIVE it would continue occupying land.

The City of Johannesburg said on Monday it would continue to uphold the law as it tried to fight a surge in land grabs across the country’s economic ...
News
4 years ago

“The EFF has a permanent land occupation programme which everyone should be fully conversant with. So we are continuing with land occupation in the business-as-usual manner we have been pursuing since the formation of the EFF in 2013‚” said Mandisa Mashego‚ EFF chairperson in Gauteng.

“This land occupation programme speaks directly to our first EFF cardinal pillar and policy position. We revere and honour it as our pillar of strength and bedrock of all our other policy statements that‚ if pursued vigorously or fearlessly‚ economic freedom in our lifetime will become real. The programme of land occupation was adopted as an EFF programme at the EFF's very first national assembly in December 2014.”

Local KZN chief denies that he sent in excavators, graders
News
4 years ago

Ramaphosa has said no one has a right to invade land as this is a clear sign of disorder and violation of the law. Responding to a land grab that took place in Olievenhoutbosch in the City of Tshwane, he warned that transgressors would feel the full might of the law.

The head of the Gauteng department of human settlements, Matilda Gasela, called on law enforcement to take the necessary steps against those who are breaking the law.

“The department is concerned that there are criminal elements within the community who continuously mislead the community. We call on law enforcement agencies to take strong action against them‚” she said.

But the EFF is not backing down.

“The EFF structures and branches lead all‚ if not most‚ land occupation programmes in Gauteng. Any land occupation in and around Tshwane is no exception. We do not take kindly to Ramaphosa's threats of action against our people's programme‚” said Mashego.

“The last time Ramaphosa mentioned concomitant action a mass murder of workers by the SAPS‚ led by the ANC government‚ happened horrendously in Marikana. So we are fully aware that Ramaphosa's action-threats may very well be deadly and our people will be on the lookout.”

Why Cape Town’s Dunoon has erupted

BLF vs Rupert - the fight continues over land invasion

The Black First Land First Movement could be slapped with an interdict to stop it from occupying one of the country's most prestigious farms.
Politics
4 years ago

The City of Cape Town has moved against Zwelitsha residents who erected shacks on municipal land last week.
News
4 years ago

After obtaining a court interdict and demolition order on Friday afternoon‚ the Buffalo City Municipality on Saturday opened a case of trespassing ...
News
4 years ago

Buffalo City municipality is briefing lawyers to bring an urgent court application to halt a land invasion threatening future expansion of the ...
News
4 years ago