Black people do not have human rights: Malema 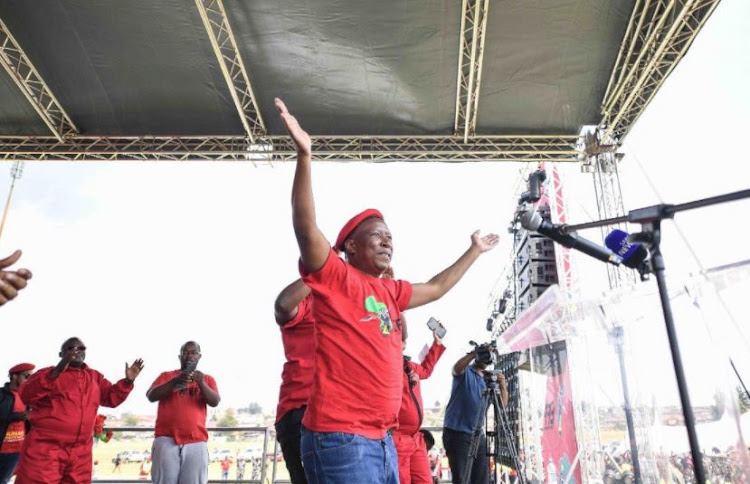 Malema was in firebrand mode on Wednesday during his speech in Ermelo in Mpumalanga on Human Rights Day.
Image: Floyd Shivambu via Twitter

EFF leader Julius Malema says black people do not have human rights‚ because they are “subhuman”.

“Your humanity has been taken away by an evil system of capitalism that produces racism. Blacks are not human. Blacks are subhuman. That’s why they can die in Life Esidimeni.”

Malema was in firebrand mode on Wednesday during his speech in Ermelo in Mpumalanga on Human Rights Day.

He said human rights and land ownership were intertwined.

“There are no human rights in a shack.”

Malema said if white South Africans farmers want to pack for Perth‚ they must go.

Malema believes only racists fled to Australia after former President Nelson Mandela was released from prison and democracy dawned.

“They will come back here with their tails between their legs. We will hire them‚ because we will be the owners of their farms when they come back to South Africa.”

Malema said he does not hate white people and the enemy are those who stole land and do not want to return it.

“I’ve got no hatred for white people. I’ve got fundamental differences‚ the way they are handling their affairs in South Africa is not right. They have to change‚” Malema said.

Dompas is dead‚ but the child is not: Mabuza

Deputy President David Mabuza quoted Ingrid Jonker’s poem Die Kind (The Child) on Wednesday during his speech during the commemoration of Human ...
Politics
3 years ago

A crew from the SABC was caught in the crossfire of a heated exchanged between two factions of the Pan Africanist Congress of Azania (PAC) on ...
News
3 years ago

South African billionaire Magda Wierzycka apologised on Wednesday for commemorating the Sharpeville Massacre in a tweet featuring a photograph of ...
News
3 years ago

The youth sit outside and enjoy the free wifi, seemingly unaware that where they sit is the spot that defined South African history.
News
3 years ago