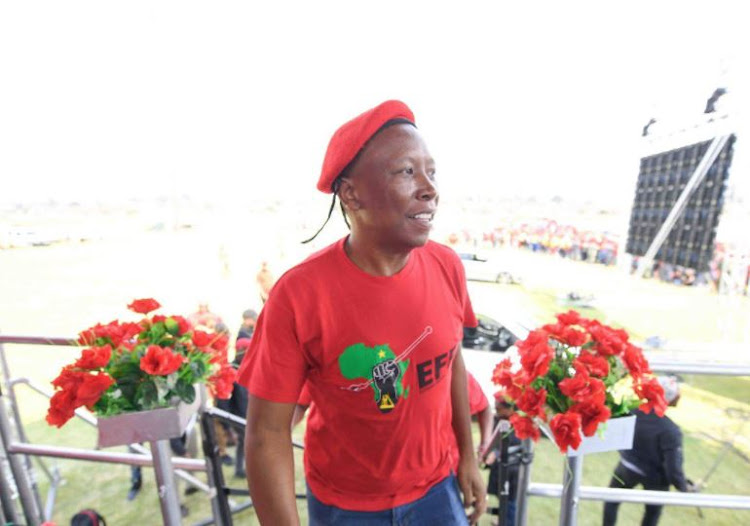 Malema accused television news channel eNCA in a series of tweets of “pushing an anti-black agenda” and “perpetuating and defending white privilege”.
Image: #RegisterToVoteEFF via Twitter

Malema accused television news channel eNCA in a series of tweets of “pushing an anti-black agenda” and “perpetuating and defending white privilege”.

eNCA editor-in-chief Mapi Mhlangu confirmed that journalists working for the channel had received abuse and threats after Malema’s tweets.

I think EFF should really discuss in depth the role of @eNCA in perpetuating and defending white privilege and see if we can’t come to the same conclusion we did with the ANN7. I don’t know maybe I’m wrong but a proper discourse can conclude this.

Who spoke about ownership of the @eNCA? There’s a difference between ownership and editorial decisions and therefore your editorial policy is to promote white supremacy that’s all. @eNCA is pushing anti black agenda and you can’t fool us about that, we see you.

“SANEF recognises and supports Malema’s right to criticise media houses and to engage editors in robust debates about how we cover the news. But this right does not extend to making spurious and inflammatory remarks that could endanger journalists‚” the organisation said in a statement on Wednesday.

“This is regrettable and must be condemned. When the EFF threatened journalists from ANN7 to stay away from its press conferences‚ SANEF met the leadership of the party and conveyed our concern about these tactics.

“We implored the EFF to voice its concerns with media houses through the appropriate channels and not to target journalists. We again reiterate this call.

“Complaints about eNCA’s editorial coverage should be lodged with the Broadcasting Complaints Commission of SA or the Press Council‚ in the case of online content‚” said SANEF.

EFF deputy president Floyd Shivambu was caught on video “manhandling” a journalist who took his photograph outside Parliament on Tuesday.

Shivambu later apologised in a statement‚ saying: “I accept that my impatience with the gentleman was inappropriate.”

He said the EFF “upholds media freedom‚ and freedom of association”.

SANEF condemned the incident‚ saying: “This type of intolerant behaviour is unacceptable in a democracy.

“As a member of parliament he is entrusted with protecting our hard earned media freedom and freedom of expression as is enshrined in our constitution.”