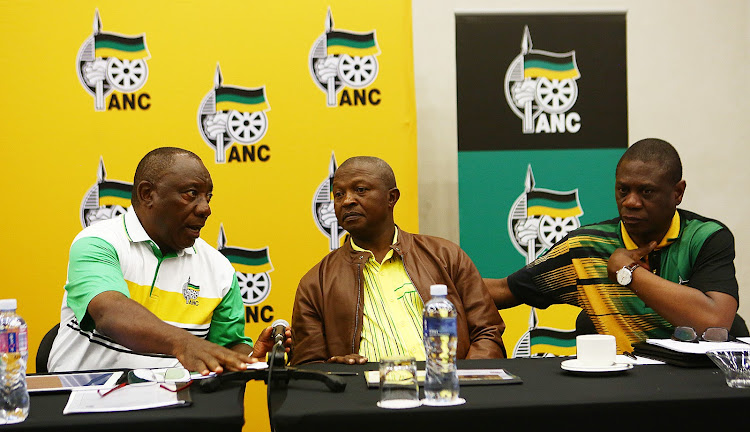 The ANC’s national executive committee (NEC) is meeting in Cape Town on Friday to discuss burning issues affecting the party.

Top of the party’s agenda will be the status of its Eastern Cape provincial executive committee. The ANC had sent a team led by Sbu Ndebele to investigate the legitimacy of last year’s chaotic elective conference‚ which chose Oscar Mabuyane as chairman to replace Phumulo Masualle.

Masualle’s supporters walked out of the conference without voting after a violent episode. Their calls for the disbandment of the provincial executive committee have become stronger after the newly elected leadership moved for a provincial cabinet reshuffle that would oust Masualle‚ who is now an NEC member‚ as Eastern Cape premier.

The meeting is also expected to discuss the dates for the KwaZulu-Natal and the Free State ANC elective conferences. The party decided to disband the leadership structures of the two provinces after their legitimacy was successfully challenged in court.

The latest instalment in South Africa’s longest running political soap opera played out dramatically on 16 March when Shaun Abrahams, the head of ...
Opinion & Analysis
3 years ago

The decision to fund former president Jacob Zuma’s legal battle was taken because the crimes he stands accused of were “of public import”‚ President ...
Politics
3 years ago

In KwaZulu-Natal an interim structure was put in place late last year after a group that backed Senzo Mchunu contested the legitimacy of the conference that had elected Sihle Zikalala as chairman. The ANC NEC had given KwaZulu-Natal until March this year to hold an elective congress to elect a new leadership.

In the Free State‚ the conference had re-elected Ace Magashule as provincial chairman in November ahead of the ANC’s December conference.

The withdrawal of the ANC’s parliamentary motion for the nationalisation of the South African Reserve Bank at the eleventh hour earlier this month is expected to be part of the ANC discussions. The Sunday Times reported that the motion was pulled after the intervention of Finance Minister Nhlanhla Nene.

Nene had apparently convinced the ANC caucus that the motion was ill-timed as it may trigger another downgrade by ratings agency Moody’s. However‚ the last-minute reversal has angered some within the ANC.

The shadowy R2,6-billion private army at the heart of government

Jacob Zuma’s legacy includes a 6‚600-strong private army that costs R2.6-billion a year and is accountable to no one‚ according to new research.
Politics
3 years ago

Gordhan plans sweeping changes for Eskom, Sanral and other SOEs

Extensive changes are in the offing at the country's troubled state-owned companies as new Public Enterprises Minister Pravin Gordhan moves to tackle ...
Business Times
3 years ago

Deputy Public Protector Kevin Malunga‚ who was considered to be a frontrunner to replace Thuli Madonsela but lost out to Busisiwe Mkhwebane‚ has ...
Politics
3 years ago