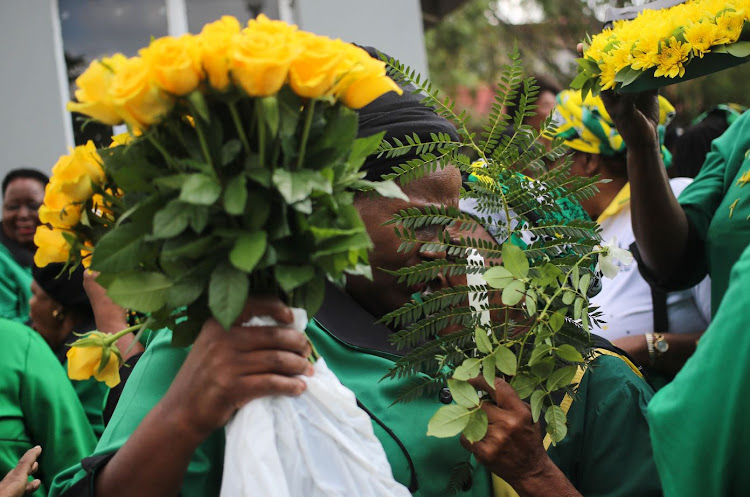 Members of the ANC Woman’s League march through the streets of Orlando, Soweto to lay a wreath at the family home of Anti-Apartheid activist and struggle stalwart Winnie Madikizela Mandela.
Image: Alaister Russell/The Sunday Times

The ANC will provide 15 buses in Soweto to transport its members and supporters to Winnie Madikizela-Mandela’s home on Thursday.

This is in a bid to show support for the party’s national executive committee leadership which will be visiting the home of the late struggle hero.

Johannesburg regional secretary Dada Morero sent a letter on Tuesday to all the party’s branches informing them about the plan.

“Please be informed that the NEC will be visiting Mama Winnie’s home on Thursday April 5 2018 at 9am. Branches are requested to mobilise members for this gathering‚ however the national office has organised buses for branches in and around Mama Winnie’s home‚” reads the letter.

Female politicians and civic activists in Zimbabwe are organising a memorial service for the late South African struggle icon Winnie ...
News
4 years ago

Morero told TimesLIVE that the buses were intended mainly for the elderly in Soweto who lived far from Madikizela-Mandela’s home.

“We are expecting just under 500 [supporters and members]‚ it’s just branches that are in deep Soweto. The ones nearer will just walk there‚” he said.

He said there had been constant stream of the party’s members in Soweto visiting Madikizela-Mandela’s home since the announcement of her death.

“[We want to] give support because the NEC is coming ... it’s just to get more people coming through‚” he added.

He said for the funeral‚ the state would make a decision on whether or not to provide buses for people who wanted to attend.

Lebani Sirenje stood on the side of the road - away from all the cameras and the crowd. In his left hand he held a copy of the Daily Sun with a ...
Politics
4 years ago

The national chairperson of the IFP Youth Brigade‚ Mkhuleko Hlengwa‚ says the late Winnie Madikizela-Mandela should be celebrated as an icon and not ...
Politics
4 years ago

As it stands‚ house number 802 with its dilapidated walls‚ peeling paint and broken windows reflects the horrible times experienced by struggle ...
Politics
4 years ago