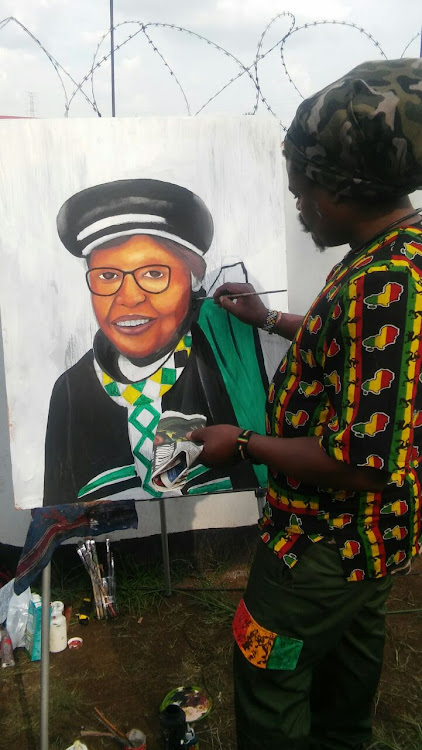 Lebani Sirenje paints a portrait of the late Winnie Madikizela-Mandela outside her home in Orlando West, Soweto. He plans on giving it, for free, as a gift to Mama Winnie's family. This is what he does for a living.
Image: Penwell Dlamini

Lebani Sirenje stood on the side of the road - away from all the cameras and the crowd. In his left hand he held a copy of the Daily Sun with a picture of the late Winnie Madikizela-Mandela.

A few photographers began to notice his work but most simply walked past him and focused on the politicians coming in and out of the late Winnie Madikizela-Mandela’s home in Orlando West‚ Soweto.

The portrait he is working on is coming together and people have begun taking pictures of themselves with it. He is not troubled by the interruptions. He allows the people to take pictures with his work and then continues to do what he was born to do‚ simply painting.

Most people would expect him to make a killing out of the work he is doing but Sirenje will not sell Mama Winnie’s portrait. Instead‚ he will give it to the family for free.

“Usually I give the painting to the family. I always give it to the people who were close to the deceased. They may decide to give the picture to a charity that Mama Winnie was involved in or simply keep it themselves.”

Sirenje‚ 41‚ lives with his wife and three daughters in Hillbrow‚ Johannesburg where he works from home. He is originally from Bulawayo in Zimbabwe.

He came to South Africa in 1996 to look for greener pastures. For about five to six years he worked in restaurants and on construction projects but that did not fulfil his joy. He ultimately decided to pursue the passion that he has enjoyed since childhood.

“I think doing what you love‚ what is in your heart‚ is fulfilling. Last time I was just working without the passion. It was not something that I liked. Now I am doing paintings. There is a connection between me and the paint.

“I have never been in an art school. I started painting when I was 10. I was using a pencils and crayons. I did not learn to paint at school. There was no art in our curriculum.

Female politicians and civic activists in Zimbabwe are organising a memorial service for the late South African struggle icon Winnie ...
News
3 years ago

“Sometimes I do murals on walls around Hillbrow and Constitution Hill and in parks in schools.” Sirenje has done portraits of former president Nelson Mandela‚ Albertina Sisulu‚ gospel stars Lundi Tyamara and Sifiso Ncwane‚ to mention a few.

He does not get invited or commissioned to do his art works during funerals. He simply goes there to do it for the love of it.

“It has become a trend for me to do these paintings. I just come and do my painting and at the end of the funeral I just give to the family as a gift. But I get customers when I am busy doing the painting at the funerals. They take my number and that is how I make a living.”

All his daughters‚ aged 4‚ 10 and 14‚ have started painting but his wife has no interest in his work.

The national chairperson of the IFP Youth Brigade‚ Mkhuleko Hlengwa‚ says the late Winnie Madikizela-Mandela should be celebrated as an icon and not ...
Politics
3 years ago

He concedes it is difficult for an upcoming artist to make a good living out of art.

Sirenje could only explain the work he does with these words: “I always treasure the fallen heroes. When I give the painting to the family‚ that smile that they give to me is something special. It keeps me going.”

Deputy President David Mabuza says funeral arrangements for the late Winnie Madikizela-Mandela are going well and government and the ANC will keep ...
Politics
3 years ago

Former president Jacob Zuma says the country has lost one of its pillars and strong leader in Winnie Madikizela-Mandela.
Politics
3 years ago