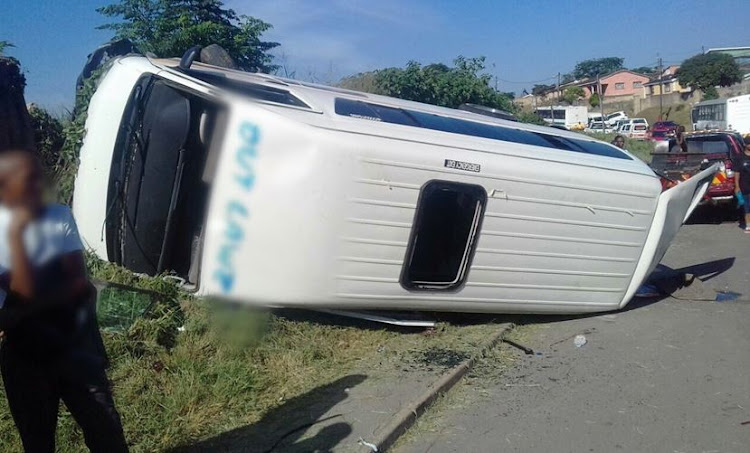 The scene after a minibus taxi carrying scholars to their first day of school. File Photo.
Image: Rescue Care

KwaZulu-Natal MEC for Transport‚ Community Safety and Liaison Mxolisi Kaunda has vowed to clamp down on illegal public transport operators in the province.

He was speaking on Saturday at a mass funeral for 15 victims including a baby who died in a horror minibus accident in Msinga last week.

Preliminary investigations by the police revealed that the driver of the minibus taxi‚ which was travelling from Greytown to Msinga‚ lost control of the vehicle and it careered down an embankment. The driver died also died in the accident.

At a briefing following the crash‚ Kaunda ordered law enforcement agencies‚ assisted by municipalities as custodians of ranking facilities‚ to formulate an integrated plan that would deal harshly with the proliferation of unroadworthy minibus taxis throughout the province.

He assured the more than 2‚000 mourners on Saturday that this plan was being finalised and would be implemented expeditiously. He further urged members of the public to resist being transported in unroadworthy vehicles which were “a death trap”.

Good Friday turned into a nightmare for Anna Jonker after she found the body of her son‚ Nicolaas Afrikaner‚ lying in the road in Kakamas. He was the ...
News
4 years ago

A driver involved in a single motor vehicle accident and who is not an employee of the owner of the insured vehicle is entitled to claim compensation ...
News
4 years ago

In clamping down on the illegal operators‚ who he said also posed a threat to the peace and stability in the taxi operations‚ Kaunda has ordered the Inter Provincial Technical Task Team (IPTTT)‚ which deals with all illegal moving violations within provincial and cross-border corridors‚ to tighten enforcement to avert illegal licensing of vehicles.

He further ordered the team to probe all the licensing stations that were issuing these illegal operating documents.

Kaunda described the crash as a blow to the province’s effort to fight the scourge of road crashes and fatalities.

“It is disheartening to stand in front of so many coffins and speak of road safety when there are still people who disregard the lives of others. This was just a deliberate act of disobedience to the rules of the road. We will advocate strongly for the owner of this vehicle to face the full might of the law.

“He consciously went through all the illegal channels to have his vehicle licensed and he deliberately ordered for it to operate illegally moreover in an un-roadworthy state”‚ Kaunda stated.

Kaunda further committed his department to work closely with the South Africa National Taxi Council to bring “dignity to this lucrative business by ensuring that it is properly regulated”.