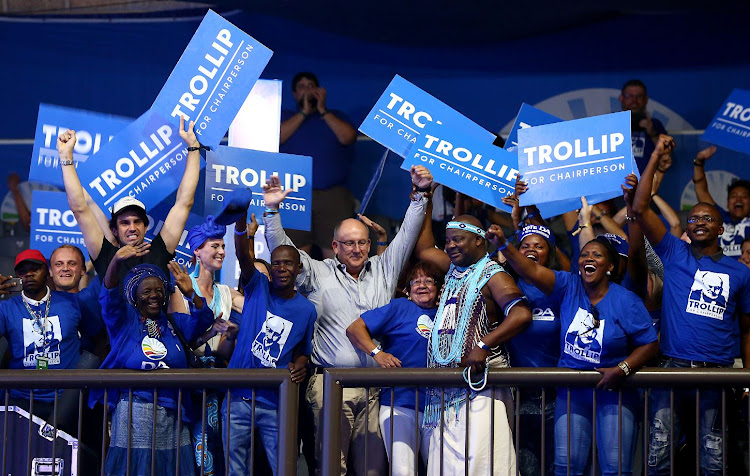 Athol Trollip celebrates with the delegation from the Eastern Cape after he was elected at the DA Federal Chairperson beating Tshwane Mayor, Solly Msimanga during the DA Federal Congress held at the Tshwane Events Centre where.
Image: Masi Losi

Nelson Mandela Bay Mayor Athol Trollip has been re-elected to the position of DA federal chairperson.

Trollip defeated Tshwane mayor Solly Msimanga in a fiercely contested election at the party's federal congress due to end in Pretoria on Sunday.

With Mmusi Maimane re-elected unopposed as party leader‚ the battle between Msimanga and Trollip was the fiercest contest at the DA national congress.

DA national spokesman Refiloe Ntsheke also emerged as the only woman to be elected to the new top leadership of the party as the third deputy federal chairperson.

The party's federal council chairperson James Selfe was also re-elected to his position unopposed‚ a position he has held for longer than a decade.

Former MP Dion George has also been retained in his position as the DA federal finance chairperson.

DA Chief Whip John Steenhuisen has cautioned his party leaders not to be complacent where they are in government.
Politics
4 years ago

DA leader Mmusi Maimane says his political opponents have painted his party as white because they are "afraid of black South Africans" who are ...
Politics
4 years ago