EFF walk out after Malema speech at Madikizela-Mandela's funeral 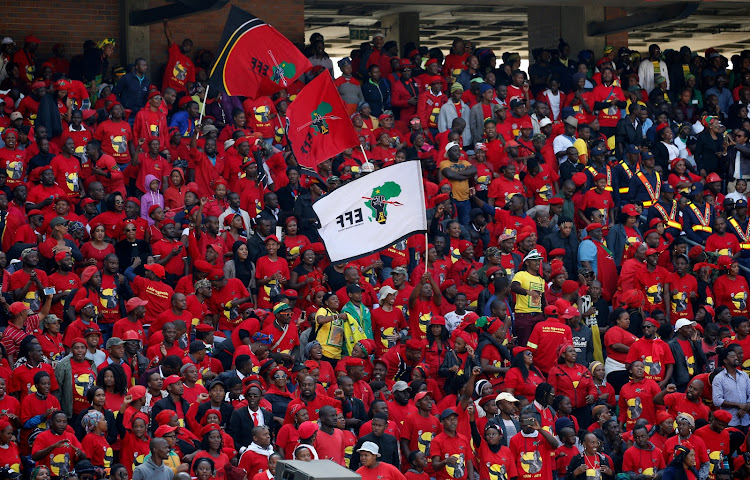 The walkout left huge gaps in the stands at Orlando Stadium.

Earlier on Saturday‚ a group of EFF supporters broke a metal fence and forced their way into the stadium. The police had unsuccessfully tried to explain that the stadium was already packed and that there was an overflow venue nearby where the service was being broadcast live to people who had arrived late.

Economic Freedom Fighters leader Julius Malema spoke at Winnie Madikizela-Mandela’s funeral on April 14 2018 after a special request from her family.

Malema called on the government to honour Madikizela-Mandela by naming the Cape Town airport after her.

Mama you were persecuted by the apartheid government and sold out by your comrades.

The firebrand red berets leader was scathing of ANC leaders who‚ he said‚ that “sold out” Madikizela-Mandela during the transition from apartheid to the democratic government.

“Mama you were persecuted by the apartheid government and sold out by your comrades. They are here and now crying the loudest‚ more than us. The UDF cabal is here. Some of those in the women's league that called you a criminal are here‚” Malema said to loud applause.

He said: “I am here not so much to bury Mama‚ because Queen Mothers do not die‚ they multiply into a million red flowers of love and freedom... I am here to pick up her spear‚ and make my vows that I will continue to fight for a mission of restoring the dignity of black people through attainment of economic freedom in our lifetime. Mama was willing to put the country first‚ above personal safety. She confronted the gun-carrying white man.”

Zenani lashes out against lies told about her mother

Winnie Madikizela-Mandela’s daughter Zenani Mandela said those who came out with the truth about her mother after her death had robbed her of her ...
News
4 years ago

Malema on Mama Winnie: I’m here to pick up her spear

'Madikizela-Mandela should have been honoured when she was alive': acting AbaThembu king

AbaThembu King Buyelekhaya Dalindyebo's attempts to attend Winnie Madikizela-Mandela's funeral was dealt a heavy blow when the Department of ...
News
4 years ago