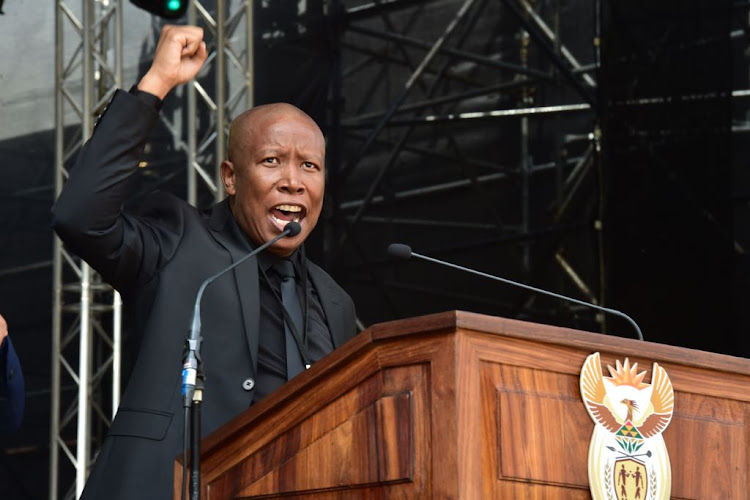 “Mama‚ those who sold you out to the regime are here”.

These fiery words from EFF leader Julius Malema had the thousands of mourners at the Orlando Stadium gathered for the funeral of Winnie Madikizela-Mandela chanting in support.

Malema delivered a moving tribute to the late icon who treated him as a son and was known for supporting him during his political troubles.

Malema said despite his grief at the loss‚ he is comforted in the way she died‚ adding that she did not sell out her people.

“Mama those who sold you out to the regime are here. They are crying the loudest more than all of us who cared for you‚” he said addressing the late icon.

Malema called out people who attacked Madikizela-Mandela during her lifetime‚ first lashing out at the former leaders of the United Democratic Front (UDF) who held a press conference during Apartheid to disassociate themselves with her.

He also attacked ANC leaders who called her a criminal and who further prevented her from speaking at youth struggle icon Peter Mokaba’s funeral.

“Sell outs‚ we see you… Life is so unfair‚” Malema said.

The EFF leader commemorated people who stood by Madikizela-Mandela when she was widely vilified.

'Madikizela-Mandela should have been honoured when she was alive': acting AbaThembu king

AbaThembu King Buyelekhaya Dalindyebo's attempts to attend Winnie Madikizela-Mandela's funeral was dealt a heavy blow when the Department of ...
News
4 years ago

“Winnie Mandela is our mother. We know her. We don’t need (former police commissioner during Apartheid) George Fivaz to tell us about Winnie Mandela‚” Malema said.

He called on the people of Soweto‚ where she lived until her death‚ never to forget Madikizela-Mandela.

Malema closed his emotive tribute by asking that Cape Town airport be named after her.

Economic Freedom Fighters leader Julius Malema spoke at Winnie Madikizela-Mandela’s funeral on April 14 2018 after a special request from her family.