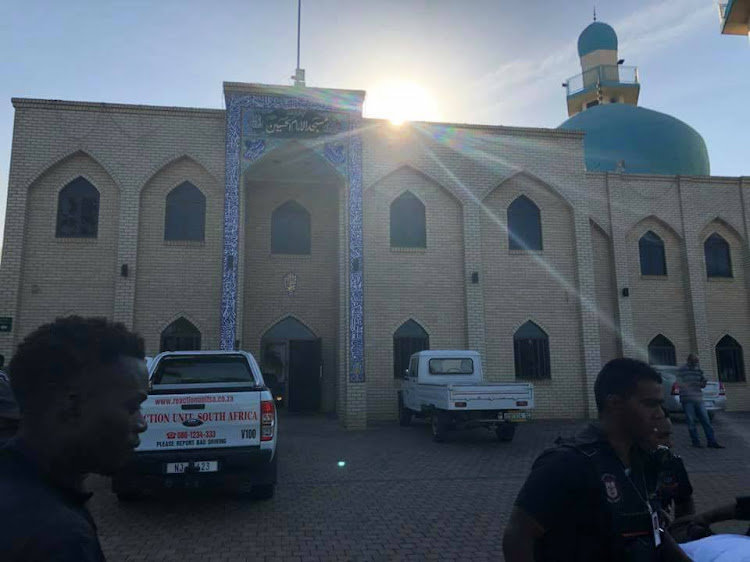 The cause of the incident is unknown‚ but police‚ private security and paramedics have confirmed that three men stormed the Imam Hussain Mosque in Ottawa in Verulam‚ north of Durban.

Two men had their throats slit and other man was stabbed in the attack. One of the men whose throat was slit died in hospital.

Parts of the mosque were also set alight.

SAPS have confirmed that a murder case‚ two attempted murder cases and a case of arson were being investigated. No arrests have been made.

‘It looked like a slaughterhouse’ – eyewitness to KZN mosque attack

A man who arrived at the scene of a bloody mosque attack in Verulam‚ north of Durban‚ likened the scene to that of a slaughterhouse.
News
3 years ago

Chairman of Parliament’s portfolio committee on police‚ Francois Beukman‚ said the alleged attack was shocking and the South African Police Service should prioritise the investigation.

“A mosque is a religious institution‚ and South Africa’s Constitution guarantees and protects the right to religious practices. This kind of attack on three innocent people is totally unjustified. We want our communities to live in harmony‚ practising their religions without fear‚” he said.

Beukman said everything should be done to arrest the perpetrators‚ and called on anyone with information to contact law enforcement agencies.

One of the men who came under attack at a Verulam‚ KwZulu-Natal‚ mosque on Thursday afternoon has died.
News
3 years ago

In a statement‚ the council reiterated that a core teaching of Islam was “respect for all human beings”.

“We remind South Africans that the makeup of our society is one of religious‚ cultural and ethnic diversity and tolerance‚” the statement read. “We call on all communities to remain law abiding citizens and refrain from any and all forms of vigilantism.”

“Such criminality cannot be tolerated. A team of investigators has been dispatched to solve the case and bring perpetrators to book‚” he said.