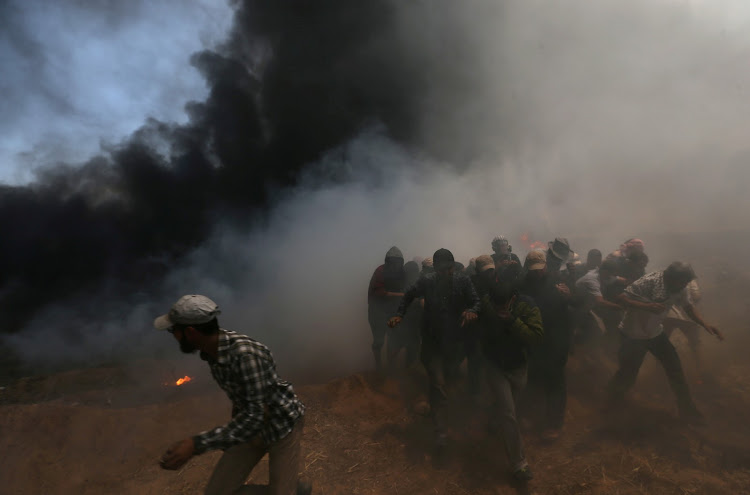 Palestinian demonstrators run for cover during a protest against US embassy move to Jerusalem and ahead of the 70th anniversary of Nakba, at the Israel-Gaza border in the southern Gaza Strip May 14, 2018.
Image: REUTERS/Ibraheem Abu Mustafa

The South African government has withdrawn its ambassador to Israel following a deadly attack in the Gaza Strip in which more than four dozen civilians were killed.

“The South African government condemns in the strongest terms possible the latest act of violent aggression carried out by Israeli armed forces along the Gaza border‚ which has led to the deaths of over 40 civilians‚” the Department of International Relations and Cooperation (Dirco) said in a statement on Monday night.

Dirco said the victims were taking part in a peaceful protest against the provocative inauguration of the US embassy in Jerusalem.

“Given the indiscriminate and grave manner of the latest Israeli attack‚ the South African government has taken a decision to recall Ambassador Sisa Ngombane with immediate effect until further notice‚” the Dirco statement said.

The department said it maintained its stance that the Israeli Defence Force should “withdraw from the Gaza Strip and bring to an end the violent and destructive incursions into Palestinian territories”.

“South Africa maintains further that the violence in the Gaza Strip will stand in the way of rebuilding Palestinian institutions and infrastructure. The routine actions of the Israeli armed forces present yet another obstacle to a permanent resolution to the conflict‚ which must come in the form of two states‚ Palestine and Israel‚ existing side-by-side and in peace‚” said Dirco.

It said the government also joined the chorus of United Nations’ member states calling for an independent inquiry into the killings‚ with a view to holding to account those who were responsible.

The United States officially opened its embassy to Israel in Jerusalem, fulfilling a pledge by President Donald Trump who has recognized the holy city as the Israeli capital.

Israeli forces killed at least 41 Palestinians along the Gaza border on Monday as angry protesters demonstrated at the frontier on the day the United ...
News
4 years ago

Israeli troops shot dead two Palestinians and wounded 12 in renewed unrest on the Gaza-Israel border on Friday as a series of protests in the enclave ...
News
4 years ago