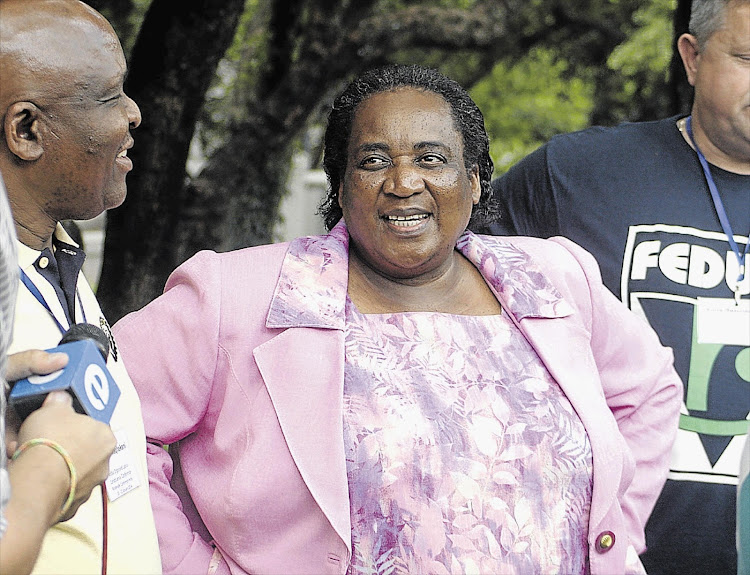 Some of the "propaganda" against the national minimum wage was nothing more than electioneering and an attempt to score cheap political points‚ Labour minister Mildred Oliphant said in Parliament Tuesday during her budget vote speech.

She said it was disturbing that those who are against the national minimum wage had nothing to offer as alternatives‚ but wanted to keep the status quo.

"Those who are demanding that the level be set higher are totally oblivious of the consequences of doing so‚" the minister said.

"It is ironic that whilst the legislators are busy doing shadow-boxing on the national minimum wage‚ it is said that a number of progressive employers have already started adjusting their workers’ wages in anticipation of the national minimum wage becoming a reality. It is also heartening that the employers in question are adjusting workers’ wages upwards and not downwards as others would want us to believe.

"Setting the inaugural level at R20 per hour was informed by research and robust analysis of various scenarios and their possible ramifications. This level is informed by the real world considerations and not some idealistic desires.

Domestic workers: the one million helpers behind the economy

The cost of a night out for two, including a three-course dinner and wine at restaurants in affluent suburbs such as Parkhurst and Camps Bay, can ...
Business
2 years ago

President Cyril Ramaphosa on Tuesday acknowledged that the proposed national minimum wage of R20 per hour or R3‚000 monthly was not a normal living ...
Politics
2 years ago

Oliphant dealt with proposed amendments to the Labour Relations Act which will allow for the extension of collective bargaining agreements where there is sufficient representation.

"In order to promote collective bargaining at sectoral level and in accordance with the jurisprudence of the International Labour Organisation‚ the operating principle underlying the extension of agreements is either whether an agreement applies to the majority of employees in the sector or to the scope of application of the agreement. In other words‚ the principle is now one of coverage rather than strict representativeness‚" the minister explained.

"This is a major breakthrough for the labour movement and not an easy victory at all. I do not understand why trade unions are not celebrating this development."

She noted that with regard to the determination of representativeness‚ the original intention of the act was that the representativeness of bargaining councils and their constituent parties would be determined annually by the registrar and not each and every time a bargaining council referred a collective agreement to the minister for extension. The amendments to the act sought to give effect to that intention and nothing more.

The amendments would also give the minister the power to make regulations on the procedures and criteria that bargaining councils must take into consideration‚ for purposes of complying with the requirements for exemptions from collective agreements.

Around 150 cleaners and security guards on Monday occupied the Passenger Rail Agency of SA (Prasa ) offices at Park Station in Johannesburg‚ calling ...
News
2 years ago

The general secretary of the SA Federation of Trade Unions (Saftu)‚ Zwelinzima Vavi‚ says unions must maintain their independence and deal with the ...
News
2 years ago

R20 an hour is worthy of a buffalo‚ not a human being. So said Thabang Mohlala‚ who on Wednesday joined a protest against the proposed minimum wage.
Politics
2 years ago

About a thousand members of the South African Federation of Trade Unions (Saftu) in Durban have heeded the call to join a general strike against the ...
Politics
2 years ago
Next Article