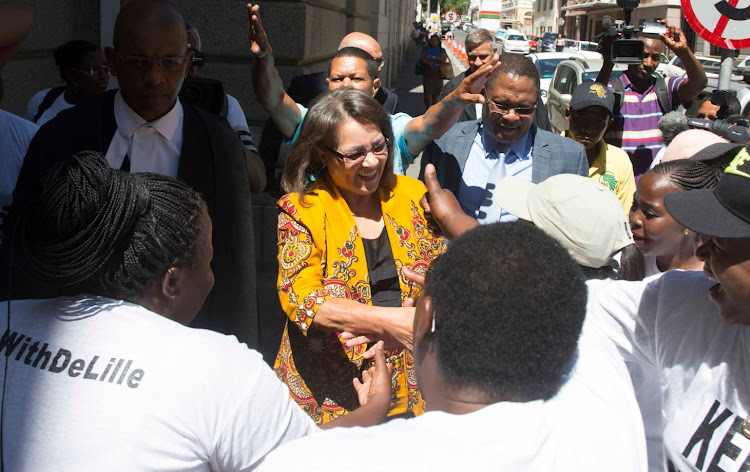 Cape Town mayor Patricia de Lille’s counsel has accused the DA of being so desperate to remove her from her position that it resorted to fraudulent means.

Advocate Dali Mpofu told a full bench of the High Court in Cape Town on Monday that the party had tried to get rid of her through legal means and when it failed‚ it concocted an “even more unlawful” alternative to fast-track the axing.

De Lille is challenging the constitutionality of the DA’s cession clause that the party relied on to fire her last month. De Lille’s assertion that she would resign from her position after clearing her name in an interview with radio host Eusebius McKaiser cost her party membership.

Embattled Cape Town mayor Patricia de Lille is upbeat that she will get her blue T-shirt back.
Politics
3 years ago

“What they want to do is to remove her as a mayor‚” said Mpofu. “They don’t care if she is a (DA) member or not. They have gone to an illegal subterfuge. This is just a smoke screen that has been put before the court. I am sure there are worse members they are tolerating.

“All we are saying is that they have chosen an illegal route. They need to canvass council members and convince those members to vote in favour of the vote of no confidence.”

Mpofu said the DA was aware that a vote of no confidence in De Lille might not succeed as she enjoyed majority support in council.

“Even if they go back to council‚ they are going to fail‚” Mpofu said.

“They failed in February and they are going to fail now. They can’t do that because she still enjoys the majority of council and her rights vested in her by the people of Cape Town.”

Cape Town Mayor Patricia de Lille will face off against the Democratic Alliance in court on Monday in a battle that will determine if and how she is ...
Politics
3 years ago

De Lille survived a vote of no confidence brought by the DA on February 15 by one vote. The party stripped De Lille of her executive powers last week‚ rendering her a ceremonial mayor.

“With one side of the mouth‚ they say conditionality is defence and on one side they say it is not‚” said Mpofu. “Ms De Lille took them at their word and laid a complaint and nothing has been done since.”